I’ll fall on my literary sword immediately and ‘fess up to the obvious – it has been far too long since I last put fingers to keyboard in this space, missing the entire month of August. I have no excuse other than I’ve been a busy fishing guide and the right combination of time and rested focus hasn’t presented itself until now.

As an independent guide based in Campbell River but with a willingness to work wherever the opportunity presents itself I’ve long suspected I have a more varied work experience than most who ply their trade in one boat and in one location. As an example of my recent work history, in mid-August I spent several consecutive days rowing in the Tyee Club (www.tyeeclub.org) governed rowboat fishery off the mouth of the Campbell River itself. I then departed powerboat in tow for 4 days of guiding a long time family party in Kyuquot on NWVI, only to return home overnight and head up to Stuart Island at first light the following day for a 3-day stint on a corporate group staying at Dent Island Resort. I then had to leave quickly, passing up a six course special tapas dinner on the final evening, to get back in my tyee rowboat before first light the next morning to start back on a run of guiding in that fishery.

And so the month carried on, with time and energy for freelance projects like this simply vanishing with each new phone call. If variety is the spice of life there’s been no shortage of it in my summer work. One personally satisfying aspect of all this for me is that by and large I’ve been able to catch fish everywhere I go and, although I may not set any records, in general I hold up my end of the bargain. I like the challenge of switching gears so to speak, adapting to the demands of each new location in a hurry. All good ….

Inevitably a lot has taken place since I last wrote and I won’t get to it all here and now. In regard to the historic Tyee Club fishery I’ll comment further after the season ends on September 15th but it’s important to note now that the rowing community is enjoying its most productive season since 2013, both for registered tyee’s and for those fish weighing less than thirty pounds. 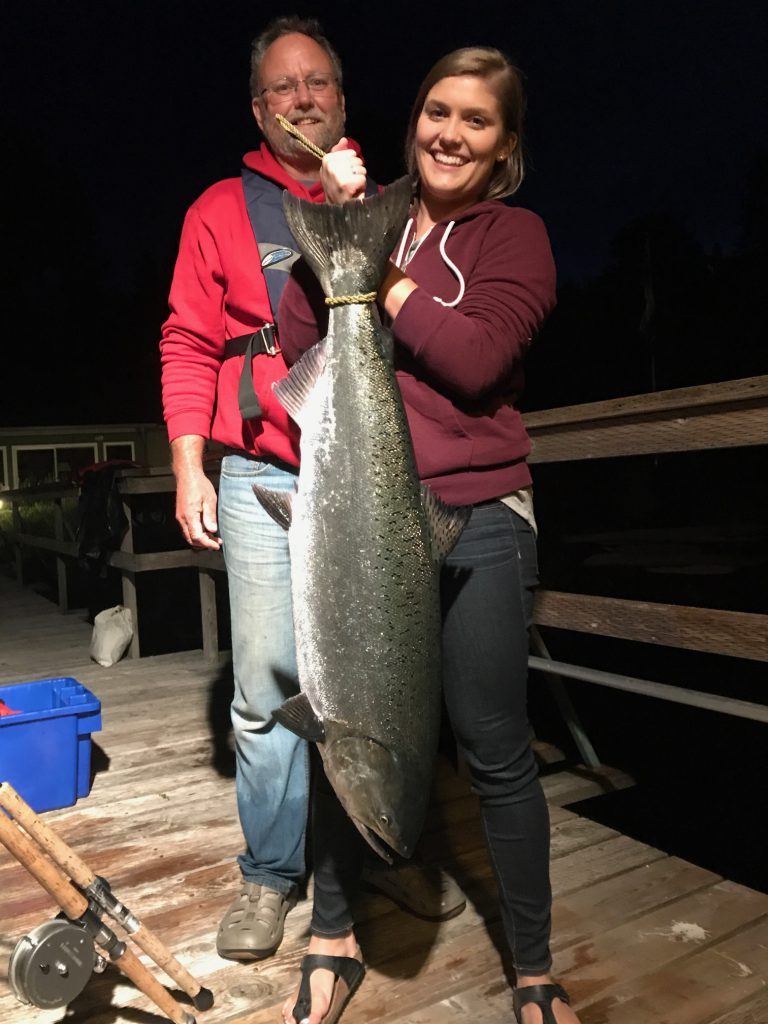 An example of a fish that didn’t make it into the Tyee Club registry – half a pound too small!

Elsewhere, over on west coast of Vancouver Island the return of chinook also appears to be strong in places, with reports of very productive fishing in Barclay Sound and the Alberni Inlet for fish returning to the Stamp River. These WCVI origin chinook have similar saltwater history and distribution characteristics with the Campbell/Quinsam fish, obviously things have gone well for both stocks. The run-size of chinook through Barclay Sound has been estimated at 70,000 fish, of a size that has allowed for a limited terminal area seine fishery on them, surely the first in a long time! Given the multi-year class characteristic of maturing chinook it will be interesting to find out what implications the year-class analysis will have for management in the next few years ahead.

Once again this year the return of sockeye to the Fraser River has been very poor, well below what was already a low pre-season forecast, so much so that the recreational fishery for other species of salmon in the river itself has remained closed all summer. Needless to say this has had large negative socio-economic impacts to the area fishery, sparking at least one demonstration to express dissatisfaction over what is essentially a tiny by-catch risk to sockeye in what would have been a chinook directed recreational fishery in-river. This degree of risk-averse management is a concern and potentially has implications elsewhere in the regional recreational fishery and will be discussed more fully at another time.

As well the return of pink salmon to the Fraser River has been far below forecast, with the most recent estimate of a 3.7 million fish run size. Given that the spawning escapement target for this stock is 6 million pinks DFO is keeping the usual in-river sport fishery for them closed even though the expected catch would be extremely small.

Unquestionably the most significant recent event in the management of the regional recreational fishery is the decision by DFO to close the halibut fishery on September 6th. The reason given for doing so is that modeling based on the estimate of recreational harvest up to the end of July combined with better known catch patterns from past years through the remainder of the summer indicate that the recreational catch would exceed the annual allocation of halibut by between 10 and 100,000 pounds by the end of September. The initial estimate of recreational halibut catch during August won’t be available until mid-September and DFO has held out promise that the fishery may re-open at a later date although this won’t be any consolation to those who had planned fishing trips during the new closure.

This action is certain to bring the vexed topic of the recreational/commercial allocation policy back onto the front burner after several years of relative quiet since the modest increase in the public fishery’s share from 12 to 15% in 2013. In an effort to keep within the annual recreational total allowable catch new rules developed jointly by DFO and the Sport Fishing Advisory Board restricting size and individual yearly catch numbers have come into effect. Because these are designed to be precautionary, with the dual objective of both staying within the TAC and keeping the fishery open all season (February 1 – December 31), this has resulted in an underage of well over half a million pounds of uncaught halibut during the previous four years.

Despite these uncaught fish “in the bank” as it were, and even though commercial halibut fishermen are allowed to carry over up to 10% of any uncaught allocation into the following season, DFO has chosen to manage the recreational fishery in the most restrictive fashion this year. Not much more to be said other than you can anticipate fireworks ahead as recreational fishing organizations will once again be compelled to go out to bat for the publics right of access to what the government continues to insist is a common property resource – stay tuned.