The arrival of the end of July can truly be described as mid-summer and as such it’s worth considering where things stand for the south coast recreational fishery and the fish, primarily salmon, that supports it. Unquestionably a major topic is the fate of sockeye returning to the Fraser River, which so far this season have been assessed at well below what was already forecast to be a low abundance year.

Predictably the mainstream media has picked up on this, always ready to highlight the negative when it comes to fish and fishing stories. For starters the topic of Fraser sockeye can’t be treated as a single entity as DFO recognizes approximately 80 individual stocks that make up the aggregate, with each one characterized by watershed and run-timing group. To date the Early Stuart and Early Summer run-timing groups have completed their migration out of the ocean and both were well below the pre-season forecast for them.

Part of the complexity surrounding the understanding and management of sockeye is that they are very cyclical fish, predominantly 4 year-old fish at maturity although there are a number of 5 year-old stocks. The cyclical nature arises out of the freshwater life-history of sockeye, in which the juveniles of most (but not all) stocks have to migrate to a lake in the river system to rear for awhile before smolting and heading out to sea. It is thought that the lakes cannot support large numbers of sockeye juveniles every year, giving rise to what are expressed as dominant, sub-dominant and several low production years, hence the use of the word cycle in sockeye management.

This year fish returning to the Chilko River, a summer run stock, are expected to contribute the largest share of the aggregate Fraser sockeye return. They have only recently started to show up in the marine test fisheries and much depends on how they have survived at sea, with big implications for several fisheries – more about this later. Simply put, the chances of there being commercial and recreational fisheries for Fraser sockeye this year appear to be remote.

With several spectacular exceptions, in recent decades Fraser sockeye have exhibited a generally downward trend in survival, concern for which has lead to three inquiries into what ails them, with the 2016 Fraser sockeye return said to be the lowest on record. Various causes have been identified as contributing factors for this, most recently the “warm blob” in the NE Pacific Ocean that existed for several years before dissipating in 2016. Most people with an interest in salmon understand that warmer water isn’t good for salmon but a couple of things cause me to wonder if the “blob” hypothesis can be the full answer. If so, why did those other open ocean migrants, chum salmon, return to the south coast in such large numbers last fall? And why has the Stamp/Somass sockeye stock done so well in recent years? 2017 is forecast to be an off-cycle return year for this stock, with a pre-season forecast of 172,000 fish yet the latest run-size update is 375,000 sockeye, more than twice as many. For fish that presumably range through the same ocean as Fraser sockeye the difference in survival rates is a puzzle.

As a result of the Fraser sockeye returns to date food fisheries on them by First Nations in both the river itself and in marine areas remain closed, a situation that hopefully will change quickly as the FSC harvest requirement is about one million fish. If those sockeye aren’t there to be caught then First Nations are entitled by law to substitute with other species and chinook salmon are the preferred alternate target fish. Calculating one million “sockeye equivalents” in chinook and the implications for the southern BC recreational fishery makes my head hurt – one consequence of the present situation is that the in-river Fraser recreational fishery for all species of salmon will remain closed until further notice. Not so long ago it opened for chinook on May 1st and in recent years the start date has been August 1st, now who knows? Spare a thought for the recreational fishery in places like Chilliwack and hope that such a scenario doesn’t come to a neighborhood near you.

Chinook salmon are less cyclical than sockeye but the size of the dominant broodyear can be an important indicator for the returns in any given year. One chinook stock that has been doing well in recent years originates in the South Thompson River, with most fish from it being four years old at maturity. The 2013 return was one of the largest in the past two decades and so we should be seeing good numbers of these fish really soon. These can be big contributors to the Johnstone Strait recreational fishery but migrate from the north coast down both sides of Vancouver Island en route to the Fraser estuary. The predominant diversion rate for sockeye is to the outside so far this summer so perhaps chinook will respond to nearshore water conditions in the same way, time will tell.

Anglers or not, many residents have commented on the number of boats sportfishing off the bottom end of Quadra Island in recent weeks. Not quite like the “killing fields” on the Wilby Shoal shallows that took place in the 1980’s but quite a number, often 50 – 100 boats, concentrated in one fairly small area. There’s two main reasons for this – firstly, the annual finfish closure around Cape Mudge is in effect, concentrating effort. Secondly, and most importantly, the deeps outside of Wilby Shoal are where the chinook salmon are consistently to be found, and they are there because there are large schools of large herring holding there.

Productive as this fishery has been it is a challenging one to fish. To begin with for most of the day the chinooks are down near the bottom, meaning fishing your lures with less than 300 feet of cable out on ones downriggers is largely a waste of time. This takes a certain level of awareness and practice to become good at, for without some real thought to the process tangles and worse become commonplace.

An additional challenge is that early in July hordes of small dogfish arrived, from where I can only guess, but they quickly became an absolute plague. My own solution to this is to fish 6” Tomic plugs and troll fast, much faster than I’ve ever fished inside waters before. This isn’t a complete remedy to avoiding dogfish but it certainly slows down the encounter rate and the big plugs at speed seem attractive to the chinook salmon.

As an example of just how prevalent the dogfish are I had a client hook a decent salmon, however after a couple of minutes everything seemed to go slow and heavy. Urging my angler to crank the line in, as it came close we were all mildly horrified to see that our fish, about 14 pounds, was swarmed with dogfish who had already eaten away the entire stomach cavity of the chinook salmon even as it was being played on the end of a line. Ghastly …. 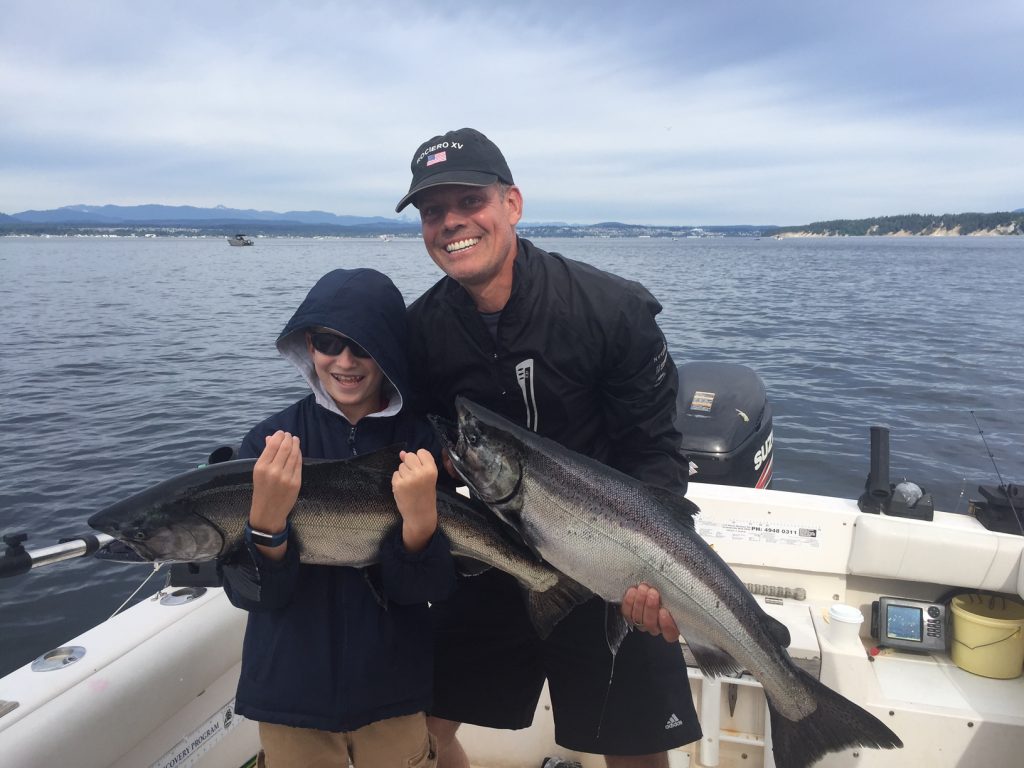 A father and son double header of 15 pounders from the deeps off Wilby Shoal, caught on large plugs trolled at speed.