Having a full weekend charter at the very end of April I was able to follow some of my own advice from my previous blog and get around somewhat, although on the Saturday travel was dictated by the weather rather than where I actually wanted to go fishing. Starting mid-morning it blew up a nasty southeaster, precluding any opportunity to head out into the open Strait of Georgia.

I had hoped that we might hit a fish or two first thing at the Hump on the high tide turn around but despite plentiful signs of bait on the sounder and the knowledge that a friend had caught a nice chinook there the previous afternoon we didn’t even get a strike. This large and longer than it’s wide mound, 3-4 km out into the open past Cape Mudge, is a key piece of structure for both feed and salmon. With the downrigger assisted deep trolling required (200+ feet) it is a challenging place to fish – on all but the slowest of tides it is best to do so around the tide changes.

With both the ebb tide and SE wind picking up speed it became time to move on and there weren’t many attractive options. I chose to head to the backside of Cortes Island in the hope that we might find both some protected water and a few chinook salmon but in the end found neither. It turned into an ugly day and by early afternoon we headed home, the long way via Hole-in-the wall, across the top of Quadra Island and down through Seymour Narrows. We couldn’t even enjoy the scenery because the clouds were hanging low on the surrounding hillsides. I was reminded of the expression “burning tomorrow’s gas today” – enough said!

Fortunately the weather forecast was correct and Sunday dawned bright and calm so off we went with renewed hope and headed straight to Sentry Shoal, just past Mittlenatch Island. Working down the east side of the shoal searching for signs of bait and salmon we eventually found a few of the latter at the bottom end. Not big fish but very welcome, two keepers and a couple of slightly sub-legal chinooks released. It seemed to go quiet mid-morning so we headed off to Grants Reef, not so far away towards Powell River.

Once again it took a little searching but we found an area that held a few fish, keeping a pair of 10-11 pounders, released three more sub-legal chinooks, missed a few strikes and lost a fish, all in about 3 hours. Not hot fishing exactly but better than I’d experienced in a while and in the sunny calm conditions surrounded by a magnificent coastal viewscape of snow-capped mountains it was pleasant fishing. The chatter on the radio was all about people looking for a positive report so in the absence of a better option we just stayed put.

With the ebb tide slowing down and knowing that we had to start heading back to Campbell River at some point we departed Grants Reef in the early afternoon. It was a 45 minute trip back to the Hump where we’d started the day before but not seeing any signs of either bait or salmon we kept on trolling down tide towards the lighthouse itself. Just when all hope seemed gone, almost right on slack tide a 5” Tomic plug down deep on the outside line got smacked hard and one of my anglers brought an 8 pounder to the boat, a nice way to finish the day.

This last chinook gave us five in the box, quite respectable under the circumstances, but I then realized when recording it on the license that we had boated chinook is three management areas – 14, 15 and 13 in sequence – in one day. I can’t say for sure but I’m reasonably certain that in 40+ seasons of fishing and guiding here that is a first in my boat.

Despite all the stories of large herring around I didn’t see any sign of bait on my sounder on the Sunday, an observation shared by a friend of mine who fished some of the same territory. He too had a productive day, putting 4 chinooks in the boat, but we both puzzled about where the bait might have moved to – perhaps the SE gale the day before had some effect on the herring. Importantly, almost all our fish were empty; it figures the hungry fish would be the ones to bite.

Over the past week the consistent theme from reports I’ve heard has been inconsistent fishing, ranging from getting skunked to doing well. Until fishing becomes more productive close to home I plan to head out into the open north Strait of Georgia if the weather allows, but things can change quickly as the month of May progresses. Tight lines! 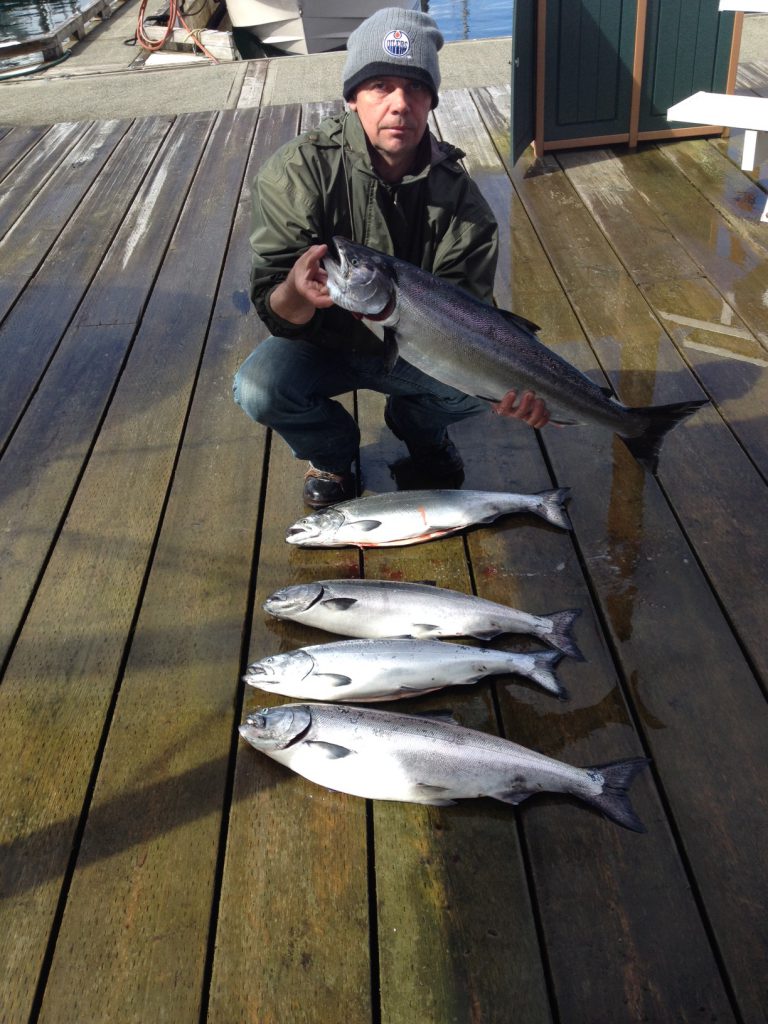