There’s no certainty to fishing anywhere at any time of the year, and perhaps that is part of the appeal of trying our luck, but in my own home area at the very top end of the Strait of Georgia spring is one time of the year when success while after chinook salmon is less assured than during other seasons. Like many experienced anglers I have had good luck in the March-April period over the years but not this one.

In fact the spring fishing out of Campbell River in 2017 has pretty much been a continuation of the winter fishery, which since early February has been frequently unproductive. It has been some contrast to the past few years during which the winter fishery offered consistent opportunity to hook and land some of the tastiest fish anywhere – as something to put on your dinner plate there’s something truly special about chinook salmon caught in the colder months, rich and oily, superb eating!

But not so much this year so far and I’d say there’s a straightforward explanation for this – a lack of feed to attract and hold the chinooks in my part of the coast. If there was one common feature of the dozen fish I’ve cleaned since late last year it is that almost without exception their digestive tracts were completely empty and this trend was matched by other information like not seeing any sign of bait on my depth sounders. Any salmon encountered are fish circulating around the top end of the strait looking for groceries and when not finding any they just keep moving.

This scarcity of both feed and salmon has been in contrast to news further south where reliable news of consistent and sometimes highly productive fishing has been in circulation. For the second winter in a row Howe Sound, on the doorstep of Vancouver, has enjoyed good fishing and interestingly one reason is a relative abundance of anchovies that have settled in that area. These fish are usually classed as occasional visitors to the southern BC coast but they appear to have consistently been in Howe Sound for a year, with one report indicating they have spawned there. For sure these bait fish are highly attractive to predatory fish like chinook salmon so it makes sense the chinooks might be there rather than elsewhere.

Like Campbell River, Nanaimo had a pretty lean winter fishery but since the second week of April the action there has exploded, with reports of highly productive fishing for chinooks – in fact it sounds like there’s an unbroken school of fish stretching from Nanoose to south of Thrasher Rock east of Gabriola Island. By all accounts the chinooks there – half of which are adipose fin-clipped, indicating a strong showing of US hatchery origin fish – are feeding on large herring, which are dispersing away from their spawning grounds along the ECVI shoreline.

Closer to home there has been some respectable chinook fishing at times on either side of Comox off and on all winter and continuing into the spring, and when weather permits several boats out of Campbell River have been able to travel out into the open Strait of Georgia to fish places like Sentry Shoal and Grants Reef with some success. However either place is an hour’s run or close to it, entailing significant gas costs and exposure to the weather if the wind picks up. Those reports also indicate that the chinook are feeding on large herring, hopefully conditions attractive to them will develop closer to Campbell River and the chinooks will surely follow!

Like the chinook salmon, the herring themselves are looking for groceries, just one order down in the food chain – zooplankton. These are the animal plankton that depend in turn on the vegetable or phytoplankton, the first order of life that consume the nutrients brought up from the deeps by the combination of wind and current action and is triggered into bloom by photosynthesis, a reaction to sunlight. Plankton build-up on fishing gear has become more noticeable in recent weeks and in the past few days there has been mass bird action at times off the bottom end of Quadra Island – something is going on out there!

Two other species of bait that have historically been important to chinook salmon have been conspicuous by their absence in the northern strait this past winter and spring – needlefish and lanternfish. Needlefish, properly known as sand lance, have been in low abundance here for at least a decade, maybe longer. I have no real idea what drives their population dynamics and DFO has no focus on this species that in many parts of the coast is or can be a “linchpin” of the nearshore marine food web. In Newfoundland DFO has just announced it will be spending $2.5 million on a study of capelin, a small baitfish found there that fulfills a similar role in the Atlantic coastal ecosystem. Would it be that DFO would do the same for needlefish here in BC!

Lanternfish are a family of deep-water fishes several species of which are present in the Strait of Georgia. Small, bluey-black in colour and distinguished by large under slung mouths and distinctive photophore (light reflective) scales on their lower flanks, they rise up in the water column at night and I think this is when the chinook find them. At times they consistently show up in the stomachs of chinook salmon but not over the past year or so, another mystery.

Anyway, as April turns into May I’m hopeful it will be Campbell River’s turn for some productive chinook fishing. We usually don’t have much to moan about when it comes to fishing here but it’s been a comparatively lean spell and we’re ready for a change! 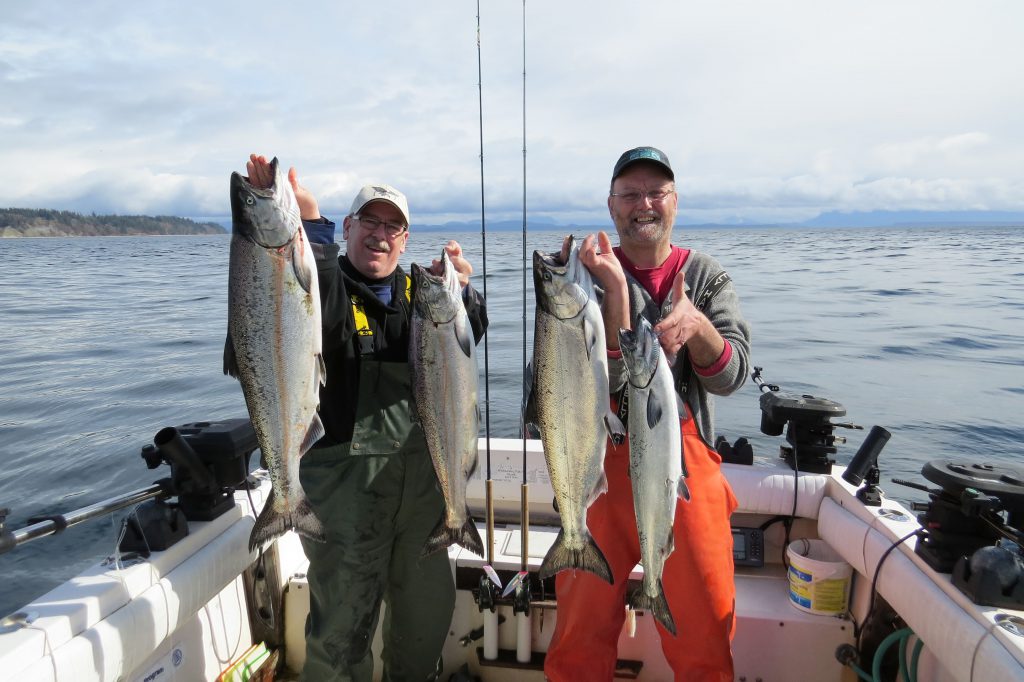 The results of a late March 2014 fishing trip near Campbell River – not this year so far!