Now that the new year is underway it’s time to assess how the winter chinook fishery is doing. I last wrote about this topic some three weeks ago after my own first trip of the winter season and I’ve been out five times since then. If asked to characterize the fishing over that time span I’d say, “OK but not great”. If further asked, “what does that mean?” I’d say that I’m confident of hooking a legal fish or two but there’s no complete certainty I’ll arrive home with a fresh fish to eat and share, which I think is how it should be.

Looking back in my logbook I see that the first trip was the most productive with three keepers, another trip produced two and two trips each had one. Two trips I came home skunked but on the second of those outings two definitely legal fish were lost close to the boat. Disappointing but that’s the way the cookie crumbled and I can’t say we didn’t have a few chances. As well there’s been some sub-legal fish caught and released, those less than 62 cm or 24.5” in length.

All fifteen have been tissue sampled – a small hole punch from the trailing edge of the tail fin – for river of origin analysis and the stomachs of all the retained fish have been bagged and dropped off for contents analysis by a PhD. student at the University of Victoria, so once again there’s a low-level science contribution from my favourite recreational activity. It takes a while to receive the results from these programs but I find them interesting personally and, combined with the results of other anglers and guides around the Strait of Georgia doing the same, are helping managers develop a much better understanding of what chinook stocks and what groceries sustain them in the non-summer period.

Because in my home turf out of Campbell River the winter chinook fishing is almost always out in the open north Strait of Georgia opportunity is linked to how strong the southeast wind is or is not blowing. It doesn’t take much SE breeze to end the chance of heading out. Fortunately the weather was largely settled over the holiday period allowing keen anglers to get out frequently, both for chinook and, slightly further way to the north and east of town, for prawns.

Perhaps I haven’t done enough prawning but my confidence when after them isn’t nearly as high as it is when trying for salmon and my conviction that I remain no threat to the prawn resource is intact after my last trip. Other than having another fine morning out on the water with visiting family from Tasmania, the new year’s eve trip produced the last salmon of 2017 (picture below), a near 10 pound chinook caught at Twin Islands while the prawn traps soaked nearby. The other excitement was getting to watch at close range as a large sea lion violently dismembered and ate, chunk by chunk, gulp by gulp, a good-sized skate. An ugly way to go for the skate but it was quite the spectacle to see. 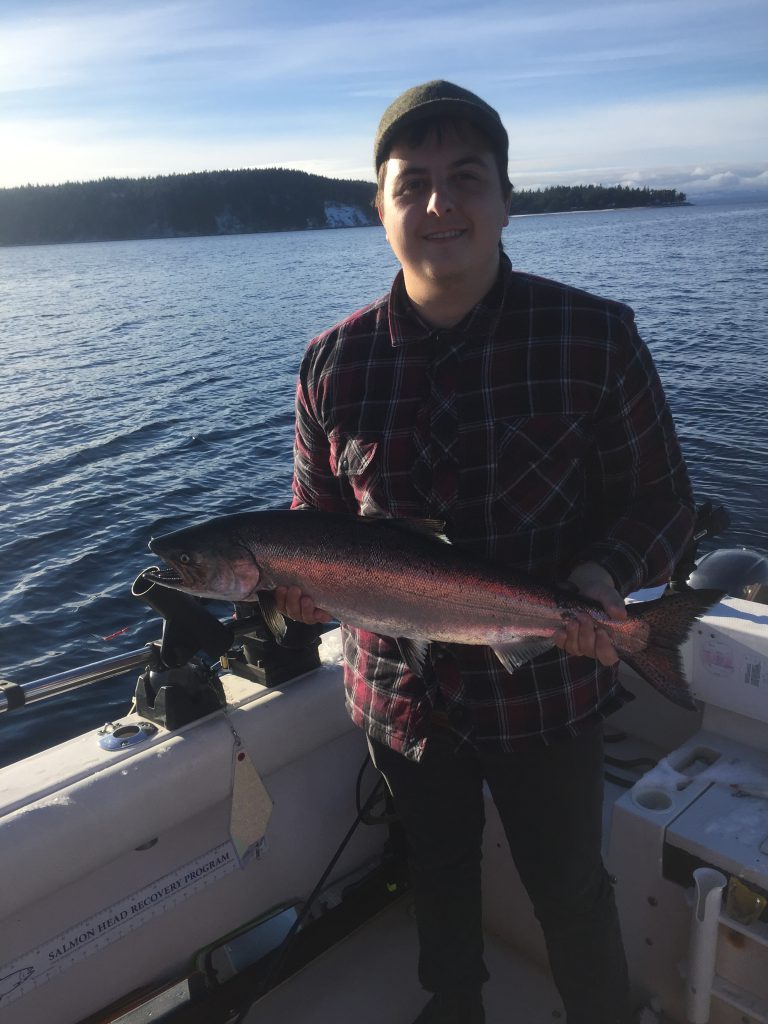 I have been fishing first thing on New Year’s Day but not this year. However the father and son team of Phil and Ross Griffith got out there very early and promptly caught a nice fish (picture below). It was in the boat by 8 am so I’m thinking they can likely claim the honour of catching the first salmon of 2018 in the Campbell River area – well done guys! 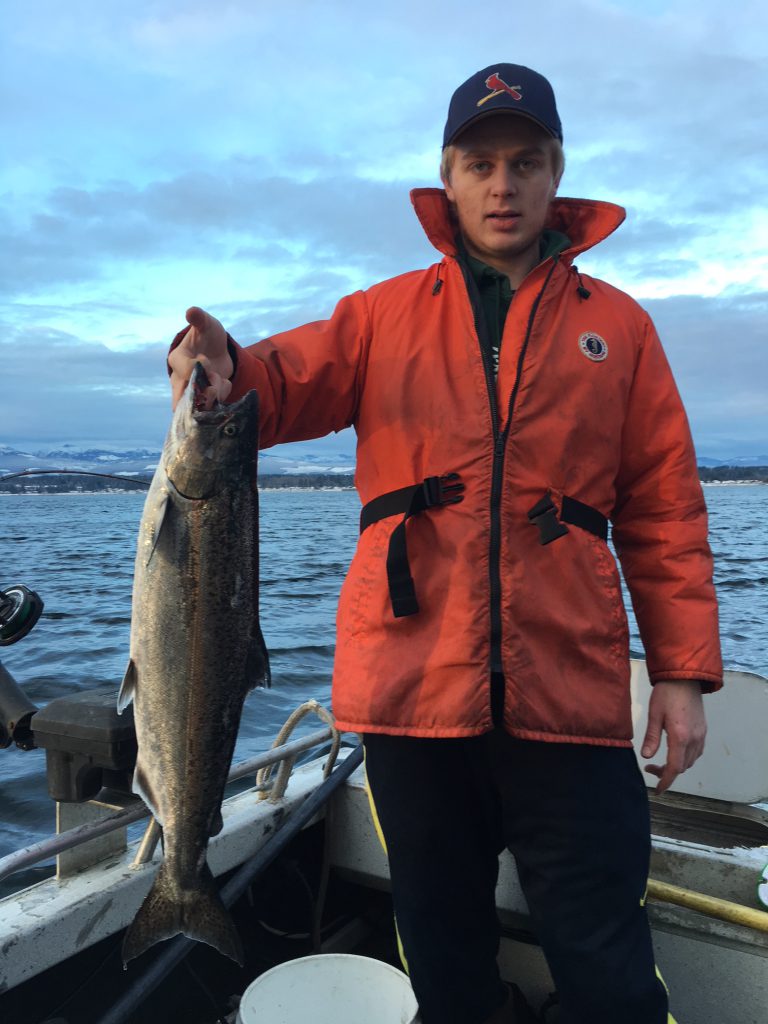 This fish and a second one caught later on both had 5-inch herring inside them, always a good sign. I haven’t seen much sign of bait on my sounders lately and the last few fish I’ve cleaned have been largely empty, however one contained a few chewed up lanternfish and two different year classes of hake, mini’s and 3-4 inches long, both very fresh.

The most productive lure for me this winter has been a 5-inch Tomic plug, in the uvbii series; last year it was a 5-inch Tubby Tomic. I think these lures are terrific and I fish them with real confidence. Even if there’s no bait that size around I think feeder chinooks expect to come across some and seem to strike these plugs consistently – can’t ask for more than that as an angler!

When I’m not fishing with plugs my other favourite lure for winter chinook is a small spoon. It’s not uncommon to see small feed, often 1 inch or less in length, in the stomachs of chinook at this time of year. Teeny hake, as mentioned earlier, firecracker herring and small lanternfish are the usual finds. A small spoon gives a fair representation of any of these and I usually fish them on a 36” leader behind a mini-flasher to provide some extra action and attractant value. By not using the standard size flasher it makes for more fun in playing the typically not overly large winter chinook and gives a better chance of a small single hook staying connected when not having to deal with the drag that comes with the larger version.

Last year the winter fishery in the north Strait of Georgia skinnied down in mid-January and remained that way until into May sometime. It seemed like there was a line from the Kitty Coleman hump across to Grant’s Reef below which reports indicated more productive fishing through the second half of the winter and spring compared to the Campbell River area. I hope the same scenario doesn’t repeat itself but I’ll be out there anyway, it only takes the chance of one of these most delicious fish for the table to keep my friends and I happy!