Amidst the less encouraging news concerning some salmon returns and the possibilities for future salmon management around the region the early season winter fishery for chinook in the north Strait of Georgia has started productively. As well there’s some hopeful news about prawn fishing and to cap it off there’s been reports of fresh winter steelhead, a bright ending to the calendar year.

There have been persistent reports of productive chinook fishing for the past month on the southeast side of Campbell River for the past month, that is when weather has allowed anglers to get out. It doesn’t take much of a southeast wind to make fishing a challenge if not impossible across the north Strait of Georgia but sooner or later an opportunity presents itself.

One such day came my way recently and off I went early with a couple of good friends to have a first go at our local winter fishery. Reports were that the fish had been feeding on large herring, which suggested fishing with medium to large plugs, and I started with 5 and 6-inch standard version Tomic’s, both uvbii models. Following the flood tideline away from Willow Point it took about 40 minutes before the first strike came near Shelter Point, a lovely bright 28-inch fish on the smaller plug. Almost immediately another fish hit the same lure, this one slightly undersize.

Keeping on with the flood drift we got pushed out into deeper water and so to counter this I picked up the boat speed creating quite an angle on the downrigger lines. This didn’t seem to put off the fish as a second keeper, a little smaller than the first, crashed the larger plug. By this time we were down near the Oyster Bay Rockfish Conservation Area so we ran back up tide part way to Willow Point to start another drift.

Dropping the plugs down to about 20 feet off the bottom it didn’t take long to hook another fish, the largest of the morning at just over 10 pounds. We carried on in the same direction on the quickly slowing tide, hooking another sub-legal fish, before deciding to quit at 11 am – a really nice morning! For those that don’t know, by universal consensus winter caught chinook are judged to be about the finest eating salmon to be had, rich in oil and flavor so we had plenty of scrumptious eating to share around. 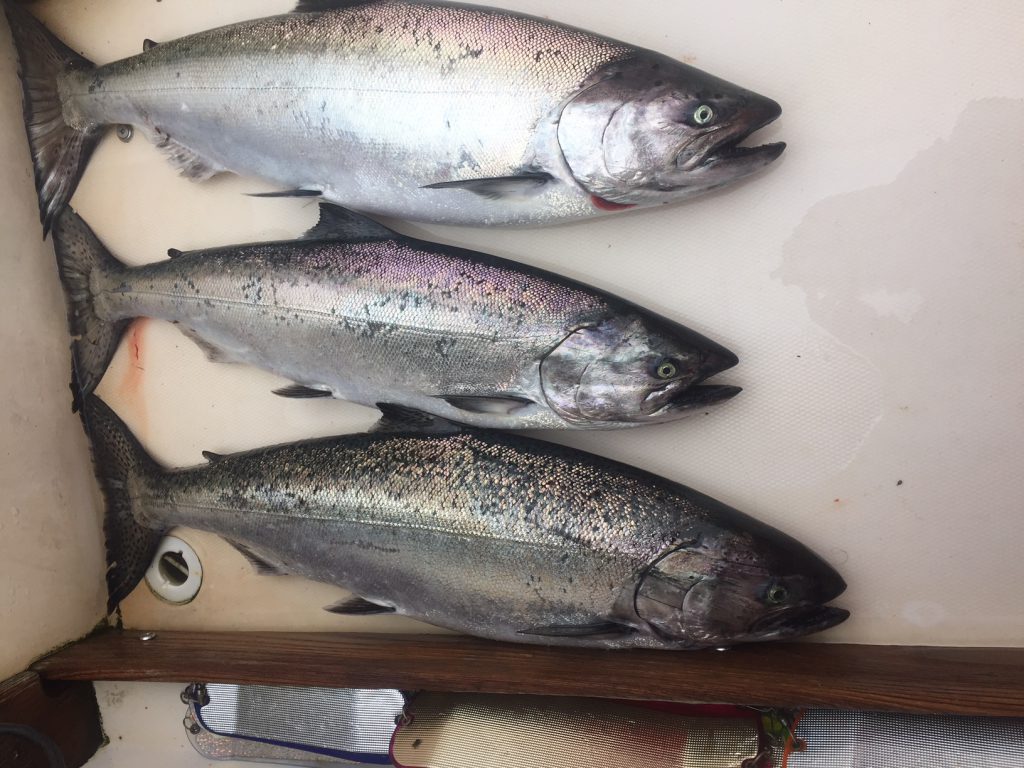 Although I usually fish along the Vancouver Island shoreline in the winter there have been reports of chinook salmon being caught not far away near the Cape Mudge lighthouse. As well the Kitty Coleman Hump near Comox has been producing fish and doubtless other locations as well. After a quieter than usual winter season last year I’m sure I’m not the only Campbell River based angler hoping for better things in the months ahead.

I’m always interested in what fish have been eating and sure enough one salmon contained a single large fresh herring. Another was completely empty but the third contained a surprise – it was fairly full of lanternfish. The surprise was because these abundant but deep water baitfish have been all but absent from the stomachs of cleaned fish in the north Strait of Georgia for a couple of years so perhaps this heralds a welcome change back to when they were a regular feature. When herring aren’t around and with the local needlefish population being depressed lanternfish can be a valuable alternative food source for chinook salmon. Next time out I’ll be sure to have a smaller black-backed plug or cop car spoon on one line the better to mimic these fish.

In the fall of each year surveys are conducted around the south coast to estimate the strength of the prawn stock. This is assessed by counting the number of berried (egg-bearing) female prawns per trap and for those sub-areas that fall below the benchmark number a 3-month closure starting January 1st goes into effect. The number of seasonal closures varies between years and can have a negative effect on meaningful recreational opportunity because the winter season leading up to the commercial season starting in May is reckoned to be the best time for anglers to harvest some.

The good news is that only one sub-area in the north Strait of Georgia, 13-13 near Heriot Bay on the east side of Quadra Island, is subject to closure this winter and this supports the reports of productive prawn fishing to the east of Campbell River. About the only negative aspect of winter salmon fishing along the Vancouver Island shoreline is that it appears to be where the prawns aren’t, requiring a considerable increase in gas burn and less fishing time to try for both species on the same trip.

Lastly, right on schedule fresh winter steelhead have been encountered in the Quinsam River in recent weeks. Always known as a predominantly early run-timing stock the next two months is prime time for this river. Once again starting December 1st the river remains closed to angling upstream of the hatchery to provide an extensive sanctuary zone for these fish, but there’s several kilometers of water between there down to the junction with the Campbell River open to fishing.

Reports of angler success in recent weeks have made their way through the communications grapevine. As well Quinsam hatchery staff have encountered several fresh-run steelhead recently while angling for cutthroat broodstock, to enable the small enhancement program there. In common with usual practice usually these steelhead would be released without further ado, however the hatchery is hoping to attach PIT tags to twenty steelhead this winter in order to assess the ability of fish to get through the upper cascades in the river just downstream of the outlet from Lower Quinsam Lake. Some work was done a couple of years ago to ease the passage of larger salmonids (chinook, coho and steelhead) through these cascades and so a receiver array for the Passive Integrated Transponder system was placed there. Should any fish bearing a tag pass by it will register a hit via a radio signal and recently the first PIT tag was attached to a steelhead this winter. The fine blue wire securing the tag can be seen behind the dorsal fin of the fish in the picture below. 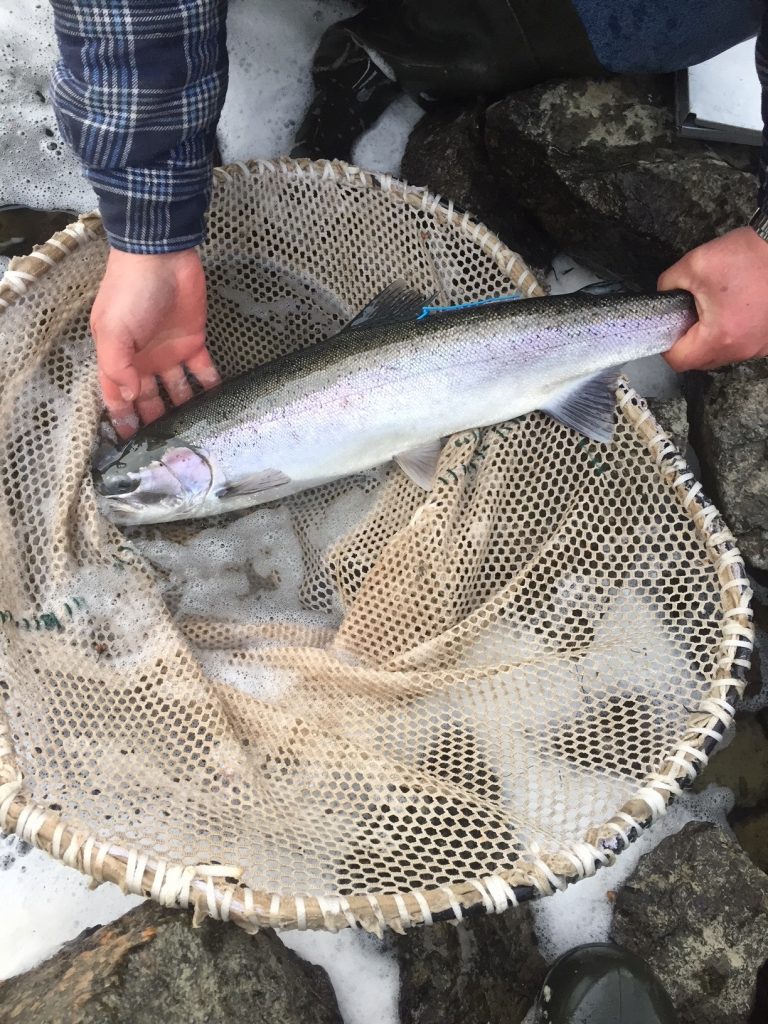 Anyway, the early winter fishery for several species near Campbell River is off to a fine start with hopefully more to come!