The 2017 fall chum season near Campbell River and in the lower straits above ended in late October pretty much as it begun – quietly. Not only was the return through Johnstone Straits lower than average the fish proved to be unwilling biters this year, strengthening the contrast with 2016 when there was a big return many of which wanted to grab a hootchy. Such is fishing between the years.

With relatively low precipitation in October keeping many of the river systems at low flow, especially the smaller ones, the fish appeared in no hurry to migrate, stretching out the run timing and keeping most of the chums in excellent condition. Pictured below are the last two I caught this year, both silver brights. However the run fizzled near the end of the month and it’s been a question of assessing the returns in-river, so far assisted by the low flows.

2017 appears to be turning out to be another one of those years in which, as a generalization, the chum returns to rivers from Nanaimo south appear reasonably strong but moving up island are considerably weaker. Both the Nanaimo and Cowichan rivers have reached their escapement targets and are supporting commercial fisheries in the marine approach waters nearby. In contrast both the Big and Little Qualicum rivers are at 10% or less of their escapement goals, with the Puntledge at little more than half at last reporting. Elsewhere the important run of chum salmon to the Fraser River has been assessed at 1.3 million fish, an “OK but not great” return.

Closer to home the Campbell River appears to have a proportionately similar chum return this fall (13-15,000 fish), mostly concentrated in the lower river where so much of the spawning gravel was moved to in the sustained extreme high water event last fall. In my own little watershed, Menzies Creek, the return has been minimal, half a dozen seen on each of a couple visits. This is a real disappointment after the moderately strong return in 2013, likely the dominant contributing broodyear, when I saw a hundred on several occasions. In the absence of regular assessment chums can be hard to keep track of as they frequently arrive in the near coast rivers ready to spawn, get on and do so and then die quickly. A volunteer like me going once a week might miss any sign of a fair percentage of the run, especially if scavengers are utilizing the small number of carcasses quickly.

For other species the returns are mixed, both between species and watersheds. In the good news category most returns of fall run chinook to the enhanced systems on the east coast of Vancouver Island appear strong. Although assessments are not final it looks like the Big Qualicum, Puntledge and Quinsam rivers have returns of approximately 10,000 fish each, all above recent year averages. Once again the Cowichan River has seen a strong return of mostly unenhanced chinook, another sign of the habitat driven recovery of that large watershed. For some reason the Cowichan River chinook stock always has a far higher than usual component of jacks (age-2 male fish) so to what extent these are contributing to the overall count remains to be seen. Anyway, there’s reason to believe that this stock may reach its escapement goal (6,500 age-3+ fish) for the second year in a row, with hope that this continued recovery will lead to an easing of time and area restrictions in the north Strait of Georgia recreational fishery intended to lower the harvest rate on this chinook stock.

Alas for coho the picture so far isn’t so rosy, as the assessed returns along ECVI to date are poor with the notable exception of the return to the Big Qualicum River. The low flow conditions in many area rivers haven’t been ideal to encourage coho migration into freshwater and they are known to wait out at sea longer than most salmon species so there could well be a late push of fish with the rain forecast for next week – we can only hope so.

One interesting observation this fall is about the real disparity in sizes of coho. There’s always bigger and smaller fish of course but this year the extremes seem more prominent and the fish in the middle sizes less numerous. This comment is based on my own personal experience working the sort table at Quinsam hatchery but has been supported by observations elsewhere. On the one hand there’s a class of husky coho in the 12 – 16+ pound range and then there’s a whole class of runts from 2 – 4 pounds. These are all age-3 coho but it’s hard to reconcile based on size they are from the same stock, which went to sea at approximately the same time and had (presumably) much the same feeding opportunities.

One possible explanation is that the smaller fish were trapped in freshwater during their usual migration timing to sea as smolts in 2016, eventually made it out a year later and only had four or five months at sea, the same as a coho jack would. The winter/spring of 2015/16 was very dry, with record low snowpack in many areas. Even so, it doesn’t seem likely that this possible reason could account for such a high percentage of the 2017 adult coho return being so unusually small. Mysteries …. 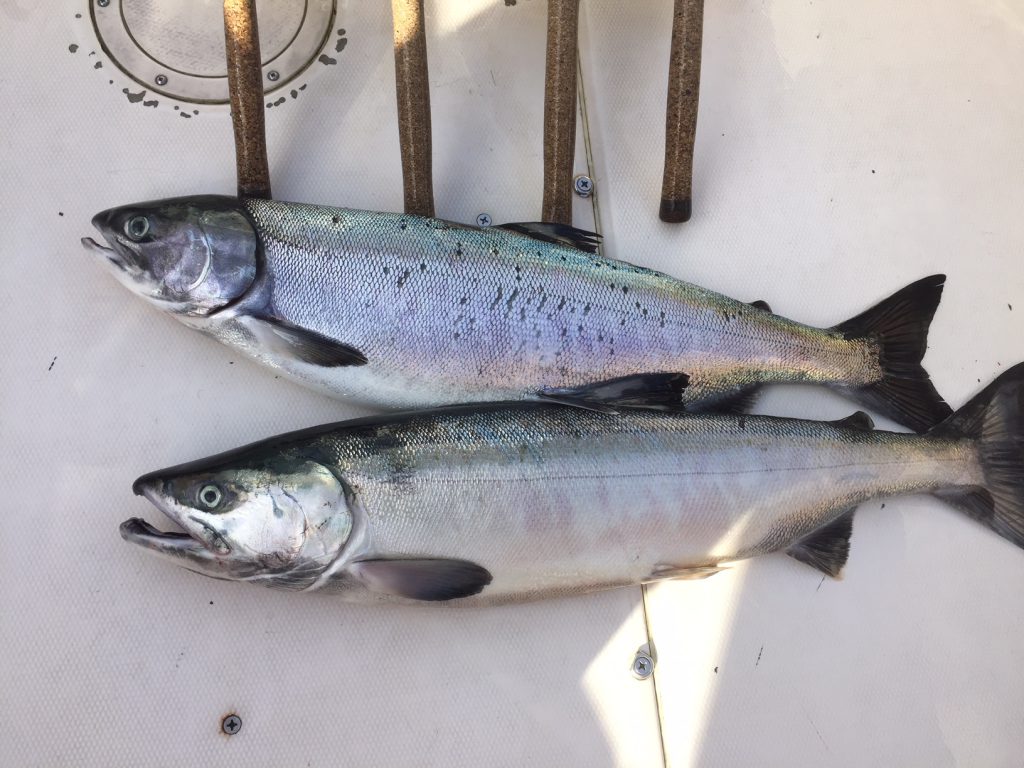