What a difference a year makes – twelve months ago salmon fishermen of all kinds were marveling at the size of the chum return to the inner south coast of BC but now, not so much. Before anyone gets too gloomy it should be said that there’s still plenty of time for the overall run-size in 2017 to increase substantially, and there’s signs of this occurring, but the first half of what might be termed “chum season” has left most fishermen underwhelmed.

Although there’s no formal forecast for chum salmon and despite the very large return in 2016 the pre-season signals for this year were for an average run-size at best, largely based on weaker than average survivals of other salmon species like pink and coho’s that went to sea in the same years (2014 & 2015) that would be contributing to this years chum return but have already returned (2015 &2016). This less optimistic outlook for the main fall run of chums this year was offset by the strong showing of the relatively less numerous south coast summer chum stocks, which were easily the most abundant in quite a few years. They show up in the sockeye test fisheries in upper Johnstone Strait and are assessed in a small number of rivers like the Orford and several in the Broughton Archipelago area. Already in the rivers for a month or more returns of these chum stocks have been larger than average, good news for the grizzly bears there.

For hook and line fishermen a factor compounding the consequences of a relatively low run size has been that for much of the 2017 chum season so far this has been a year when the these fish haven’t wanted to bite. Chums are a bit quirky this way but it has been an observed phenomenon over time and there’s little doubt that this is one of those years when the chums for reasons unknown simply don’t want to bite on gear that has been reliable in the past.
Not only does this affect angling success but also there are commercial trollers that target chums and usually the mass of flasher and pink hootchy rigs each boat can fish ensures a steady harvest, but not this year. Reading the first commercial catch report I thought there must have been a typo when it stated the catch for 13 boats over 14 days was 456 fish but apparently it was correct, the chums had a bad case of lockjaw!

Knowing that I didn’t feel so bad about my own lack of success – shared by everyone else I saw on the water – during the couple of times I fished on the Thanksgiving weekend, usually about the peak of the run-timing and a fairly certain bet for productive fishing. All I can say is that there seems to be some evidence that this condition is easing and I had slightly better success on my most recent trip (October 14), boating five chums even though there was little sign of chums moving through during the time I was on the water. In many previous years that would have been considered a mediocre catch but this year a handful of chums in the boat is something to feel good about! In addition we caught a mid-teens chinook, part of a double-header, and released one large wild coho. 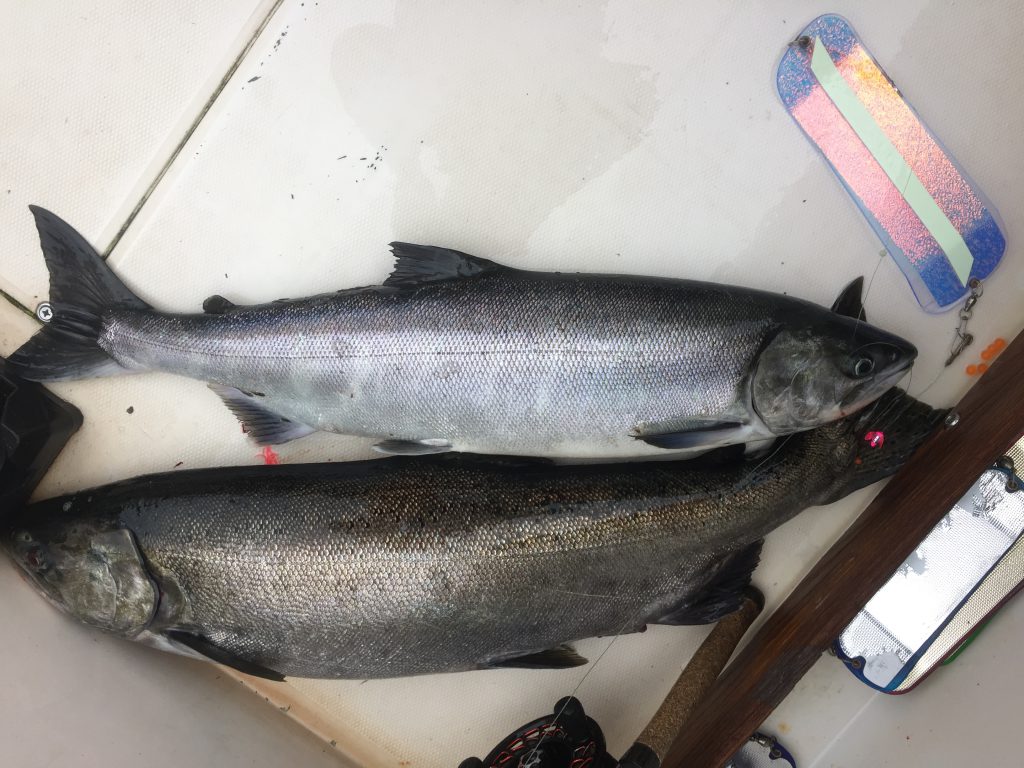 I’ll say one thing about these particular chums, all of them were in silver bright A+ condition. This gives me hope that the run and the state of maturity of the fish are later than usual, likely driven by the dry fall so far. Homing salmon can be very sensitive to atmospheric pressure and with the sustained dry weather they might have been in no hurry to migrate out of the open ocean. Now that the weather has changed, with the more customary low-pressure system dominating the fall weather forecast for the next while at least, the rivers should rise to provide ideal conditions for holding salmon to migrate into freshwater and get on with spawning season in earnest. I just hope we don’t get too much rain as we did last fall!

There are signs of this delay elsewhere – I started back on the fall crew at Quinsam hatchery last week only to find that the large egg-takes from pink salmon were still underway, weeks later than usual. By the time I start back to work there the large production egg-takes are normally long since completed and every few years I might get to take part in a small “mop-up” egg-take on my first day or two back. Not this year, the pink salmon have been very slow to mature and even now, in mid-October, there are still plenty of “green” fish well shy of suitable maturity from which to take eggs and milt. The final production pink salmon egg-take for 2017 is scheduled for October 16th, easily the latest on record at this 40+ year old facility. The good news is that after a slow start the run-size estimate in the Quinsam River has now exceeded 100,000 pink salmon (and still counting), plenty to seed all the available river habitat.

Another surprise has been the number of coho encountered in the first few days of fishing for chinook broodstock, which is accomplished by a 7-8-person crew using a beach seine net in the lower river. Like other anglers and guides I’ve been concerned by the low numbers of coho encountered while fishing near Campbell River in the saltwater this past late summer and early fall period. In contrast there have been reports of highly productive coho fishing in Juan de Fuca Strait around the bottom end of Vancouver Island so perhaps fish are migrating inside mostly via the southern route, I sure hope so.

Anyway, with the arrival of some rain fall now feels like it’s underway and everything that goes with it in these parts, including the most important part of the lives of salmon, successful spawning and the start of a new generation.