It was one of the more notable U-turns in recent memory by a federal agency, certainly in the field of fisheries. Having written last week about the decision by DFO to eliminate several long running components of the Salmon Enhancement Program, including the Salmonids in the Classroom, on June 15th it was announced that the decision to do so had been rescinded. One can only conclude that the tsunami of public outrage was heard loud and clear in Ottawa, lead by Liberal MP’s in BC whose constituents were hounding them night and day over the original incomprehensible decision.

Perhaps not the best way to operate government, and it’s unfortunate that the Minister Dominic Leblanc was put in such a unflattering position by his staff, but the outcome is the correct one for both the Canadian public and the salmon resource about which it cares so much. As well, the Liberal government has announced that DFO, including the Coast Guard, will receive $1.4 billion in new A-base funding over the next five years to “fill core integrity gaps in the department” (how’s that for a fine piece of bureaucratese?).

Understanding these monies will be spent not only over time but all across the country, one can only hope that some of it will trickle down to activities that support the recreational fishery in BC. Resources that are directed towards what the BC provincial government using GDP has assessed as the most economically important fishery on the west coast have been steadily cut for a decade. In partnership with some understanding Ottawa departmental staff the Sport Fishing Advisory Board has put together a proposal called the Recreational Vision Implementation plan that would cost about $2 million over several years – small change in the big picture, money that would yield significant benefits, but as yet there’s still no word as to whether this proposal will be acted upon – we can only hope.

Switching to fishing itself, as June has progressed the catching in the Campbell River area has caught up with the rest of the Strait of Georgia. It would be more accurate to say the chinook fishing has become more consistent on a day-to-day basis, largely because the herring schools have arrived and settled into the area, at least for the time being. There’s been the usual size mix of fish for the time of year, mostly 8 – 15 pounders, but there has been encouraging numbers of larger fish too.

This was demonstrated by the results of the second annual Royal LePage Salmon Derby held in Campbell River on June 10th, in which all top ten fish were over twenty pounds, with the top two being over thirty – very impressive for the second weekend in June I’d say. Congratulations to the winners, indeed to all the participants and sponsors, and especially so to the organizers who took time out from their busy professional lives to structure, promote and run an event that has received publicity for the town far and wide and looks set to become an established annual fixture. I haven’t yet heard what funds the derby generated but if it’s anything like last year the dollars that will be directed to two local charities will be significant. Bravo!

And I’ve heard of several other tyee’s being caught in the north Strait of Georgia in recent weeks, impressively large fish for the inner south coast in early summer. At the other end of the size scale some coho have started to show up in the north Strait of Georgia, a welcome development even if they aren’t quite the same challenge as chinook at this time of year. I caught one last weekend down at Grants Reef near Powell River and saw signs of salmon activity on the surface that I associated with coho. Upon returning home I learned that several fellow guides had encountered more coho while fishing around the south end of Quadra Island that day, even though they were fishing larger lures and deeper while after chinook salmon.

DFO is keen to know about the seasonal distribution and abundance of coho so a couple of days later I went fishing with the intent, at least initially, of targeting them in the hope of obtaining tissue samples for DNA analysis to provide stock composition (river of origin) information. I regret to say that despite using smaller plugs and spoons in shallower water I failed to catch any, indeed saw no evidence they were around, so I’m thinking that the abundance in the north Strait of Georgia is low at present. The chinook fishing nearby proved better however …. 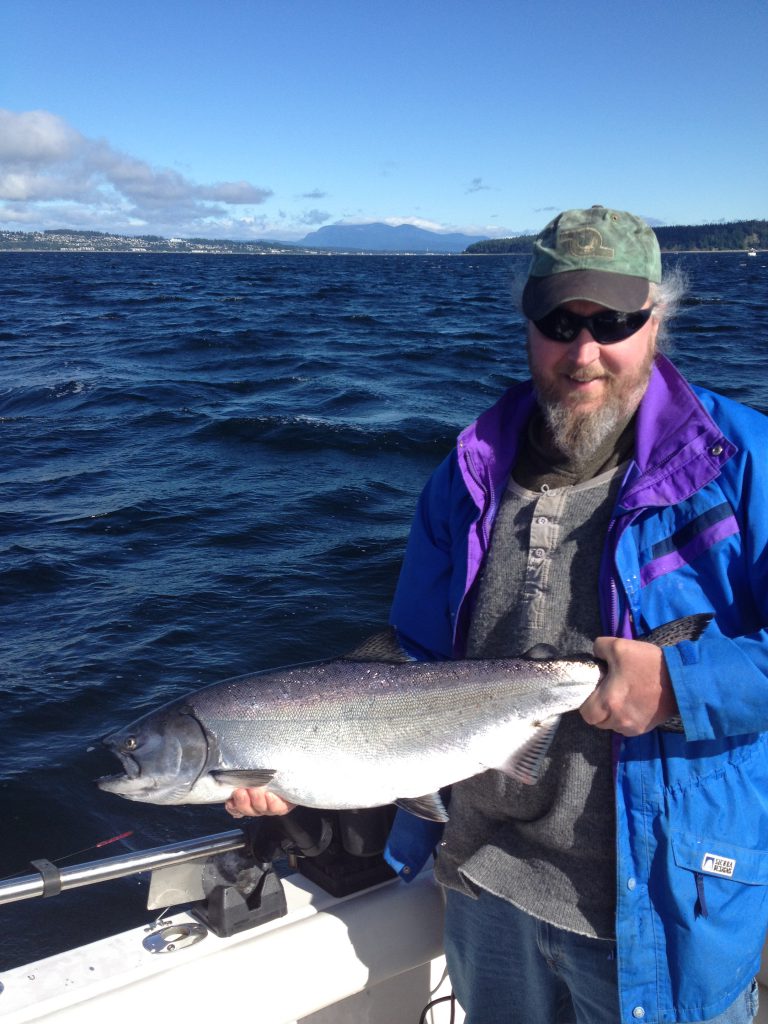 Examples of chinook caught recently in the Campbell River area.

Anyway, the summer solstice has arrived and the weather has turned less like early spring and more what we would expect at this time of year – time to get out and enjoy some wonderful summer fishing!