With June fast approaching as a generalization the chinook fishing at the very top end of the Strait of Georgia near Campbell River has become more productive, although if I had to use one word to describe things I would use “inconsistent” because the experience can really change between days. And another generalization is that the fishing is a little more consistent the further south you travel – given decent weather anglers from Campbell River routinely hike down and fish a line bounded by the Kitty Coleman Hump in the west and Grants Reef over towards the mainland shore.

That said anglers can expect productive chinook fishing almost anywhere now, the key seems to be finding the bait schools, dominated by herring. Most chinook caught recently contain medium to large herring although I had one surprise last week when a fish I cleaned contained a largely intact anchovy. I’m quite convinced in my own mind it wasn’t a stolen or discarded bait from a teaser-head and didn’t look like it had been previously frozen or sat in salt brine for any time. It’s the first one I’ve ever seen around my home turf, a sign perhaps that the anchovies that have taken up residence in Howe Sound are spreading further afield.

I’m always interested in what fish are eating, or not as the case may be, and this curiosity has taken on new significance with the start of a program to routinely analyze the stomach contents of chinook and coho salmon caught in the Strait of Georgia. Will Duguid is a PhD student at the University of Victoria Fisheries Ecology and Marine Conservation Group and is leading this study as part of the overall initiative to better understand factors limiting growth and survival of these salmon. In this it is linked with both the DFO Avid Angler program and the Salish Sea Marine Survival Project run by the Pacific Salmon Foundation. As well, given the lack of research and assessment on non-commercially fished animals such as sand lance (needlefish), lanternfish and opal squid in the Strait of Georgia, over time this study may yield important data on the seasonal distribution and abundance of these and other prey species for chinook and coho.

A number of businesses have volunteered to act as collection depots for the study, including Tyee Marine in Campbell River, Pacific Net and Twine in Coombs and Island Outfitters in Victoria. There are guidelines for those wishing to participate and Will can be contacted at willduguid@hotmail.com for complete details. The intent is to analyze all stomach contents – bone fragments, scales, etc. – and over time contributing participants will be provided the results. I’ve made my first few contributions and it’s a little trickier than I first thought dealing with what after all are the messy bits of a fish, but I’m organized now. Hint – fill out the individual sample sheet first before cleaning the fish!

With the prospect of good numbers of fish around and larger herring as the principle prey for chinook salmon many anglers and guides are using similar sized plugs as a lure of choice. 5 and 6 inch Tomic plugs, in either the standard or Tubby models seem to be working well, especially those of the uvbii type (UV body, iridescent insert). It’s hard to imagine just how much colour difference between plugs shows up at 200+feet down but consistently productive patterns are the #’s 602, 639 and 700.

When fishing is a little slower or simply for contrast I’ve been using a flasher and spoon combo that’s developing a good track record for me. The flasher is a Big Shooter Salty Dawg model paired with a 4” Goldstar green and silver, fish scale UV spoon. I’ve been using a 6 foot leader between the two and all I can say it has been consistently productive for me.

At the other end of the animal spectrum, I’ve been really impressed with the consistent presence of Humpback whales around the north Strait of Georgia and into Discovery Passage this early summer. I started fishing here in the mid 1970’s and I’m sure it was twenty years or more later before I first saw one here yet in recent years sightings have become almost routine. In part this is because the population continues to rebuild after many decades of slaughter but also their presence now must be linked to sufficient groceries, herring mostly, to keep them around. And not all Humpback whales migrate away for the winter, this February I had a good look at one while out chinook fishing just south of Campbell River.

One other whale observation I’d make is that in contrast I can’t remember the last time I saw a Minke whale. They were never numerous but Minke’s were the larger whale we’d occasionally but fairly regularly see around Campbell River throughout the first few decades of my time here, now it can be years between sightings. A baleen whale like Humpback’s, they too feed on krill and smaller schooling fish like herring. Why Minke whales don’t appear to be prospering while their larger relatives are is something of a puzzle.

With the arrival of June the summer fishing season can really be said to have started and hopefully the productive chinook fishing in the north Strait of Georgia continues – tight lines! 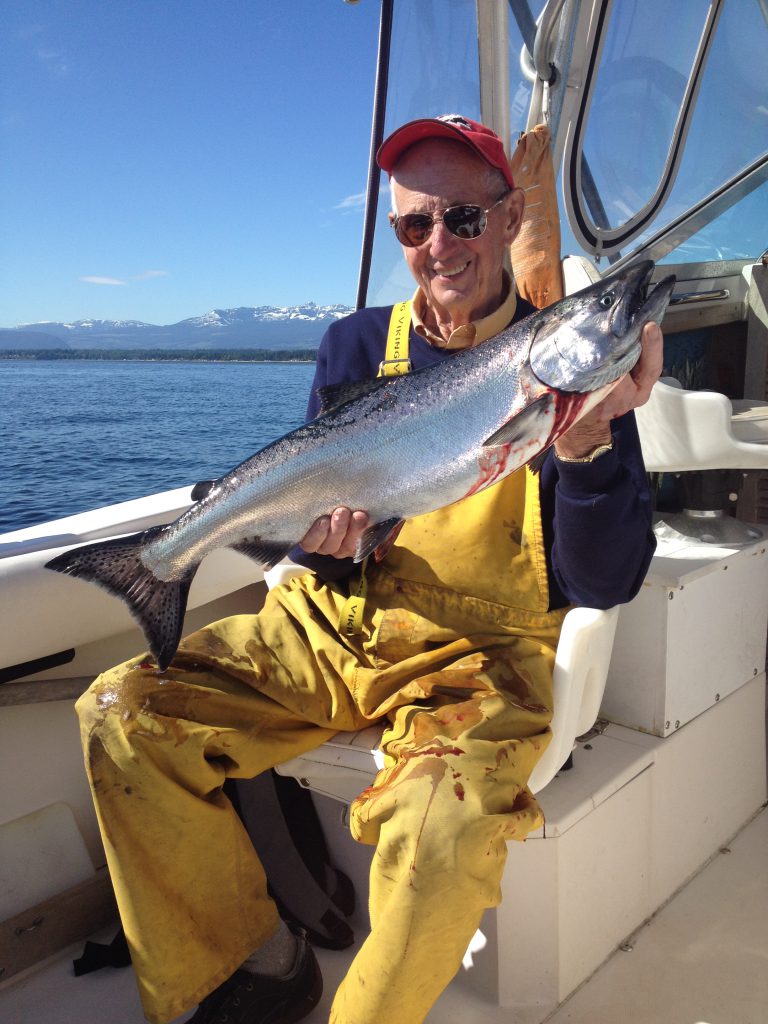 A happy angler with a recently caught chinook near Campbell River