It hasn’t been the easiest winter for those who like to go chinook fishing at this time of year. On many days the persistent southeast winds have eliminated any chance of getting out on the water in the northern Strait of Georgia and conversely, for those anglers who fish on the mainland side in inlets like Howe Sound the outflow winds have been equally tough on opportunity. Fortunately the Arctic high-pressure system appears to have weakened such that the outflow winds have ended for the time being but any appreciable low-pressure front brings the south easter’s. Sometimes it seems like a week goes by between days when it’s calm enough for an angler to get out there.

I console myself to some degree by thinking that the fish are very safe with nobody out there after them, not that I think that the recreational fishery is any threat to the salmon resource, and modern science has demonstrated that wind is an important factor in supporting a healthy food chain by driving the upwelling process that brings nutrient rich water from the deeps to the surface. The nutrients in combination with light causes photosynthesis triggering blooms of phytoplankton at the base of the food chain upon which, ultimately, all else in it depends. Hard as it may be to deal with it at times wind is good for salmon!

My winter chinook fishing takes place out of Campbell River which almost always means south of town out in the open north Strait of Georgia, working the Vancouver Island shoreline between Willow Point almost to the upper boundary of the Rockfish Conservation Area at Oyster Bay. I occasionally fish the south end of Quadra Island from the Hump into the Cape Mudge lighthouse on a late ebb drift but generally don’t because my perception is that there are more sub-legal chinook on that side. My sense is that this winter there’s relatively few undersize fish around but in the absence of any compelling reason to do so I haven’t fished the easterly side since last summer.

I’ve been out five times since mid-December, approximately once a week, and I’ll say one thing about the chinook fishing this winter, it’s consistent. That could mean all kinds of things of course but in my case I haven’t encountered any what I would describe as hot fishing however I haven’t been skunked either, bringing home at least one legal fish each time, sometimes more. Patience is always a virtue for an angler and never more so than recently. Not uncommonly it could be an hour or two before or between strikes and my faith in the gear I’m using and the ground I’m covering have been put to the test but so far, so good and I haven’t heard any more productive news from others to inspire me to change my approach. The photo’s with this column are examples of recent catches. 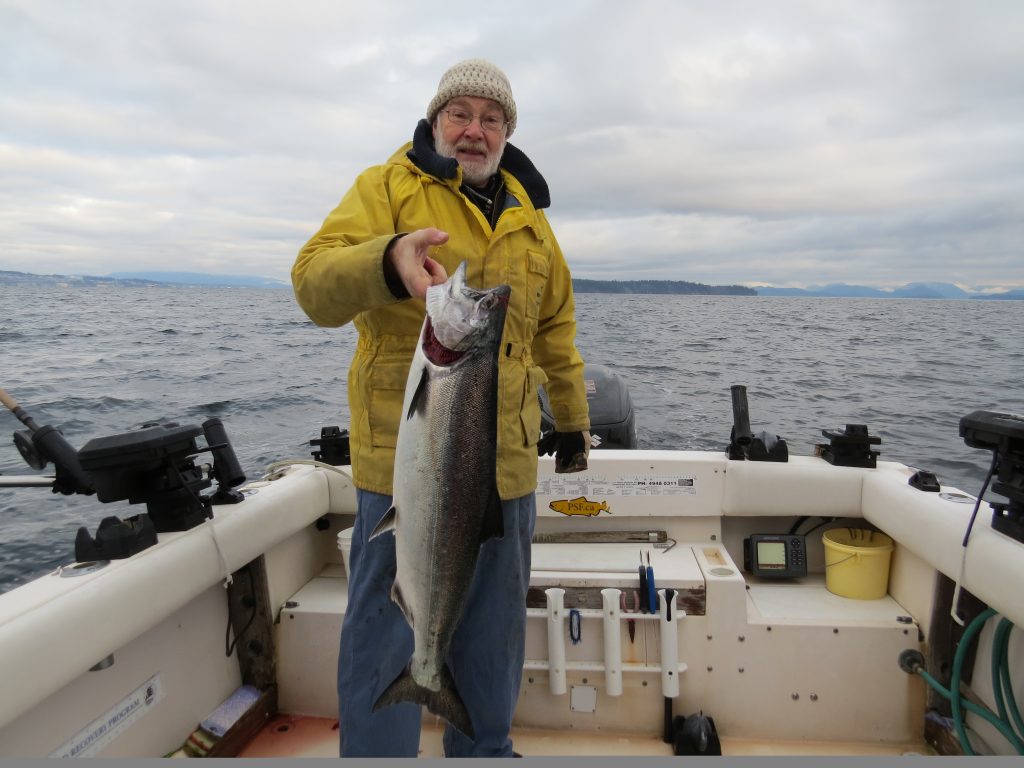 Another part of the consistency I referred to is that I’ve seen very little, as in next to no, bait showing on my sounders and in this I’m not alone – others I’ve talked to have made the same observation. More specifically this seems to be backed up by the chinook salmon themselves – of 9 chinook I’ve cleaned over this recent time span all of them have had completely empty stomachs, or nearly so. The only exception was on one day I cleaned two fish and each contained a single 3-4” hake, quite fresh and recognizable.

This raises the question of why the chinooks would even be present in the absence of feed. My guess is that there’s always some chinooks migrating around the north Strait of Georgia on the hunt for groceries and the area and depth I fish is favorable to them as they travel through.

Back in the 1970’s when I first started winter fishing for chinook salmon it almost always consisted in trolling shallow close to the shoreline, and there are still a few experienced anglers that continue this, with considerable success at times it must be said. This fishery is mostly keyed to the presence of large herring, schooled up and moving south to the big early spring spawnathon further down on the Vancouver Island shore. I’ve seen a couple of boats working the inshore tack this winter but not consistently and other than spending a little time early in the morning fishing in a moderate depth of water (less than 150 feet) I’ve mostly been fishing quite deep, using about 200 feet of downrigger cable in 220-250 foot of water. Until there’s evidence of a stronger abundance locally my instinct is to keep fishing in the deeper transit zone. 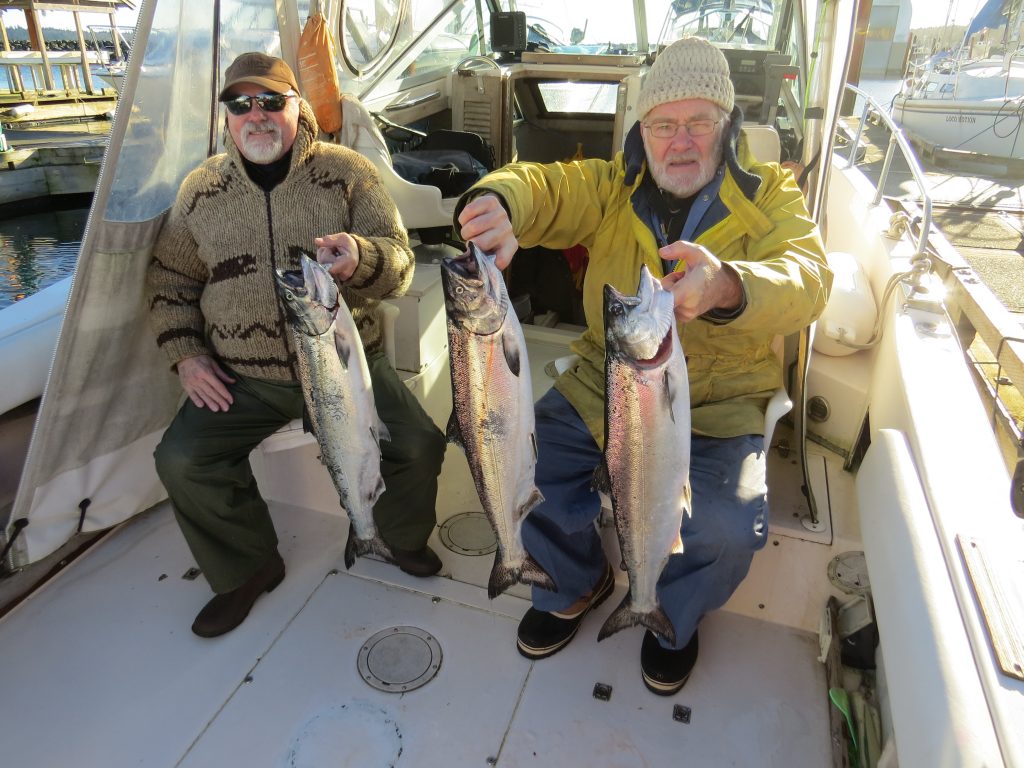 In the customary absence of dogfish in the winter quite a few anglers I know fish primarily or exclusively with bait, usually herring or anchovies in a teaser head or sometimes cut-plugged herring. Me, I mostly fish with lures and I mostly use plugs for this fishery. With no great numbers of chinooks around I like to cover ground, actively searching for fish, and plugs fish well at speed; almost without exception I troll with the tide. My belief is the fish are hungry and not too fussy about what they bite, if it looks reasonable and is presented well the strikes will come.

This winter the plug of choice appears to be a 5” Tubby Tomic in the #158/602 colour scheme and on the fairly new uvbii/uvbiirt body style. I’ve caught one fish on a flasher/spoon combo, everything else has been on a plug – I’ll change only when there’s a compelling reason to do so!

At some point some feed will settle in to the area, likely either large herring as noted before or lanternfish. These small dark coloured fish reside in the deeps and move towards the surface at night, which is when I suspect the chinooks encounter them. I’ve been surprised not to see any evidence of them around this winter but when I do I’ll start fishing smaller lures, plugs, spoons, hootchies even, which are predominantly black. The Cop Car pattern or #512 Tomic plug are excellent patterns to use when lanternfish are around.

The main thing when fishing is like this is a combination of persistence and patience. Have faith in your gear and your technique, keep at it in likely water and almost certainly you’ll catch one of the best eating fish around – tight lines and bon appetit!