Tradition suggests that the last column of the year should be devoted to looking back over the past twelve months, so here goes.

Around my own hometown of Campbell River 2015 ended and the new year started with some terrific fishing for chinook salmon. Regrettably I can’t claim to report this from first-hand experience as I was far away down under getting my jumbo brown trout fix, but that’s another story. However when I returned home everyone I talked to said the same thing, that chinook fishing had been terrific over the holiday season. Unfortunately the fishing tapered off about the time I got my boat back in the water later in January and it remained a little skinny right through into the late spring, although I always felt like I had a chance at a legal fish every time out.

I’m told it wasn’t the most productive winter fishery around Nanaimo either but across the way in Howe Sound and down into the Vancouver area the winter chinook fishery was the best in many years – small fish, big fish and everything in between, most importantly in sustained numbers, a season to remember by all accounts. And as always the fish were where the groceries were, with lots of herring recruiting into Howe Sound.

One area that I’ve learned more about in recent years is over near the mainland, around the islands between the entrances to Bute and Toba Inlets. It’s a bit of a hike from Campbell River to get there but if fishing is slow close to home and the weather permits the spring into early summer chinook fishery can be well worth it. In 2016 I first went in the third week of March and last visited this area in late May, hooking and boating multiple fish each time. One interesting feature of this fishery is that the chinook salmon consistently contain hake, a species that seems to be thriving in the Strait of Georgia now.

The summer chinook fishery started and it was interesting to hear frequent commentary about how slow the fishing was in the Campbell River area. In actual fact, according to the creel survey 2016 was the fourth most productive summer season in Area 13 out the past 20, it only really suffered in comparison to 2015, which was the most productive since 1989. June saw the first of what is likely to become an annual event, a one-day salmon derby around Campbell River (Area 13) put on by the local Royal LePage Advance realty office. It was a big success, with over 700 anglers registered to fish and approximately $45,000.00 raised for two local charities. The fishing was decent too, with all of the top ten fish weighing over 20 pounds, of which the largest was 28lbs. 10oz and two others over 26lbs., dandy fish for the second week of June in inner south coast waters!

Based on a pre-season forecast for places like Nootka Sound there were big expectations over on the west coast of Vancouver Island for hot chinook fishing during the summer but many of the hopes weren’t realized, although it depended on exactly where you were fishing. I spend quite a bit of the summer in Kyuquot and overall it was a good season there – in fact some of the early summer fishing along the surfline was excellent, driven by an influx of opal squid that stuck around for a couple of months. As in real estate fishing sometimes is all about location, location, location ….

And nowhere was this more apparent than in the traditional rowboat fishery for homing chinook along the shoreline adjacent to the estuary of the Campbell River itself. Tyee Pool is usually the place to be but the 2016 track record of the Tyee Club did not make for encouraging reading – 13 tyee’s in total registered with the club – yet the return to the river was the best in 10 years or more. The reason for this is that for the most part the fish were holding further south along the downtown waterfront and for example those fishing from the angling specific Discovery Pier enjoyed a record season – over 80 large chinook salmon landed, including 15 tyee’s (fish over 30 pounds), with many more lost. Those relatively few rowboats that fished down there as well as powerboats had some memorable fishing for large chinook salmon, especially from late August onwards.

Coho fishing was something of a mixed bag and somewhat unexpectedly a relative abundance showed up in the southern Strait of Georgia in late June. The action seemed centered around Nanaimo, which saw red hot coho fishing all through July with the fish pushing northwest over time although they never quite settled in on the south side of Campbell River for any extended period – it’d be good for a few days then go quiet for longer, puzzling because there was always plenty of bait on the drop-offs around the south end of Quadra Island. Coho were less prevalent than usual in the lower straits fishery above Campbell River and the same held true over on WCVI, although there were stories of very large coho there – every area and year is different. The good news is that overall there were some decent coho returns to south coast rivers this past fall and nowhere was this truer than for the Interior Fraser stock aggregate which bounced back big time after a disastrous 2015 return.

There are only two large sockeye stocks around the southern BC coast, to the Stamp/Somass watershed on WCVI and to the Fraser River. The return in 2016 to the former was well above forecast and supported good fishing opportunities for all gear types, however the return to the Fraser was the worst on record, for reasons unknown. In general there were relatively few pinks around this past summer in SBC waters, both because it was an off-year for the large Fraser River stock and because it is thought the eggs in the gravel in other rivers in December 2014 took a hammering from the very high water flows resulting from sustained rainfall across the region then.

In contrast the 2016 chum salmon return to southern BC was likely a modern record and every watershed large and small had plenty of fish spawning in them. And while out in saltwater they provided outstanding fishing for all gear types, certainly the recreational fishery for chums in the lower straits above Campbell River was highly productive. The weekend long Browns Bay chum derby weighed in 11,000 pounds of chums, even though effort was depressed because of stormy weather. All in all the fall chum run provided an excellent finish to what overall was a pretty good salmon fishing year I thought.

And one other event of note took place in 2016. Not quite on par with Brexit or the results of the US federal election but I more fully got with the times and started writing this blog. I think it’s been a positive move for me, if nothing else the discipline of fairly regularly putting fingers to keyboard is good for my mind and I hope that readership continues to grow – certainly I’m grateful to all of you who have signed up to receive this column. Best wishes and tight lines for 2017!

In closing, the picture below shows the results of my last fishing trip of 2016 (December 30th), out with my friends Scott and John. Not big chinooks but some of the best eating fish to be had anywhere. 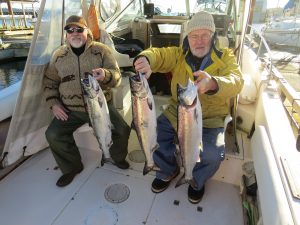