Fall for the fisherman represents perhaps the biggest seasonal change, simply because many of the salmon along the coast move from saltwater into freshwater to undertake the most important phase of their lives, spawning and the start of the next generation. And some fishermen, such as myself, find that their own lives to a degree mimic this seasonal movement of salmon and they themselves spend more time in and around rivers also.

Having spent the summer out on the saltchuck fishing and guiding, beginning in September and through into December I find myself river oriented in two principal ways – looking for adult salmon in a creek I keep an eye on and working the fall crew at Quinsam hatchery, a DFO facility near Campbell River. It goes without saying that the experience at each venue is quite different but each offers a window into the world of salmon as they seek to perpetuate their species.

Readers of the earlier print version of this column will know that since the early ‘90’s I’ve been looking into and out for Menzies Creek, a fairly small, steep slope watershed that flows into the bay of the same name just up coast from town. Every creek needs a few friends and it would appear for this one I’m it. The highway to the north island parallels the creek uphill once the road leaves sea level, with several small tributaries flowing from the west through culverts under the road to join the mainstem.

Several salmon species persist in this creek but never in any genuine abundance so far as I can tell and each year brings new satisfactions or disappointments depending on what I find. Despite what appears to be a fairly healthy river environment with all the elements of suitable habitat, nearly a quarter-century on and despite some modest-scale interventions the fate of salmon in Menzies Creek always seems more precarious than it should be. In this I suspect it is similar to many small watersheds all around the coast.

Heading into the second half of October the calendar has arrived at the peak timing for adult salmon in the creek. Pinks have been present for six weeks now but the majority of the coho, chum and occasional chinook salmon will show up between now and Remembrance Day. Pink returns this year have been less than expected all around the south coast and in Menzies Creek the run is perhaps 20% of the broodyear and I’m quite convinced in my own mind that the very high water event in December 2014 wrought great damage to the newly laid eggs. Several long-term logjams were blown out completely and one lovely run I called the 2 Spruce Pool was obliterated, stripped right down to bedrock by the rushing water. Hard for a fragile salmon egg to survive that, I’m just happy that some pink salmon made it back to start the rebuilding process all over again, although the wet fall we’re having so far isn’t giving me much confidence there won’t be a repeat blow-out event.

It’s been a fall season of challenges at Quinsam hatchery so far; nothing new in that but perhaps more so than usual. First of all the pink salmon decided to delay entering the Quinsam River, with the majority of the return preferring instead to hold in the upper Campbell River above the confluence of the two rivers until October. Having had a run of record pink returns over several recent years, in some cases exceeding one million fish, this years return is much smaller, likely a combination of the December 2014 flood killing most of the natural in-river production and poor marine survival in the record warm northeast Pacific Ocean.

Compounding the challenge of the late arrival of pinks in the Quinsam and into the hatchery complex itself, meaning egg-takes were considerably delayed, many of the fish weren’t sufficiently mature to be used as broodstock and, because of poor returns elsewhere to rivers along the east coast of Vancouver Island, requests for additional pink eggs by stewardship groups increased considerably. Despite all this hatchery staff have managed to fulfill most of the external demands and increase the pink egg production for the hatchery itself back to levels not taken for several years. Because of the successive very large returns of pinks hatchery production had been reduced but faced with poor survival and a proportionately low return the decision was made to get more pink eggs in the hatchery “bank”.

Even before the pink program officially finished attention switched to acquiring chinook broodstock, a task of the highest priority. This is usually accomplished by using a beach seine in a pool lower down the Quinsam River, about half-way between the hatchery and the confluence with the Campbell River itself. A seasonal floating fence is installed in low water at the head of the pool, with the spacing between the upright tubing such that any fish over about fifteen pounds can’t get through. 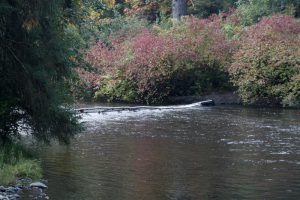 Of course the success of floating fence operation and seining below it is entirely dependent on the fence not being submerged and the high water event that struck right before the Thanksgiving weekend put it out of commission, enabling all salmon to easily swim over or around it. With the chinooks just starting to move into the Quinsam hatchery staff had one productive day of seining before the floating fence was submerged and the river had just become fishable again when a succession of storm/rain events, that we’re in the middle of as I write this, has increased the river height once again. 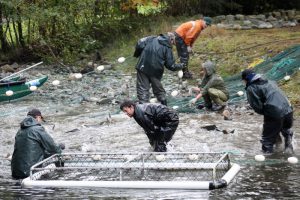 A successful set with the seine net closed up on the shore in 2011.

With a 4+ million egg target and average fecundity in the 5-6,000 egg range it takes close to 750 female chinook to achieve the hatchery production goal for this species. Although a considerable number of chinooks will eventually swim into the hatchery complex itself there’s no guarantee of just how many might do so and one of the objectives of conducting the broodstock capture fairly low down the river is to get the desired fish before they find a clean patch of gravel and a hot date and get on with things the old fashioned way.

The high water event a week ago was such that it required that all the panels on the main counting fence immediately upstream of the hatchery were lifted so many of the fish have been free to swim upstream. Not only has this put those fish out of reach for broodstock but the number and type of salmon which went through is unknown, reducing the accuracy of the overall salmon return assessment program.

As I said, fall 2016 is turning out to be a challenging one at Quinsam hatchery, with more to come I’m sure.