The first of October doesn’t seem late to be writing about the season for chum salmon in the lower straits above Campbell River, however there’s a sense of that today because these most idiosyncratic of salmon have been caught in unusual numbers for almost three weeks now. I know some anglers and guides who experienced productive fishing for chums when I was still in my rowboat after tyee, surely a sign of earlier than usual arrival along the inner coast.

Campbell River might be unique in having developed a focused recreational fishery for chums in saltwater, starting some 25 years ago. Such a fishery may exist elsewhere but I haven’t heard of it yet and if it exists I’m reasonably certain it wouldn’t be of the same size or duration. Many anglers from elsewhere imagine chums to be an unattractive fish and there’s no question they become especially colorful in freshwater and sometimes out in the saltchuck as well. However we are fortunate here because the majority of the fish are in good shape, many of them deserving of the term “silverbrights”, although the barring patterns brought on by advancing maturity can often be made out underlying their ocean sheen.

Most importantly for anglers is that frequently they are willing biters when presented with the right lures and chums are determined fighters on the end of a line, no easy victories with these fish! Each year I get inquiries from anglers who haven’t fished for them or (more frequently) are frustrated because they can’t catch as many as they think they should, based on the number of fish they see signs of or being caught in other boats nearby. Been there, done that, what fisherman hasn’t, but I’ve settled on some gear and tactics that works for me more often than not so what follows is a quick primer on how to catch chums.

Unless conditions indicate otherwise – weedy, windy, tough tidal conditions, lots of boats nearby or, best of all, a hot bite with plenty of action – I try and fish as much gear as I can. In my boat that means four lines, with either two fishing lines stacked about 20 feet apart on each of two downrigger lines or one solo and one double line set-up port and starboard and a fourth line fished off my stern downrigger. It takes a little practice but maximum gear for chums seems to be a worthwhile objective, always keeping in mind that it’s better to fish fewer lines well than more lines badly, surely a recipe for frustration if not worse!

One of the reasons for maximizing the number of lines in the water is to create more flash to attract chums to the area under your boat and this can be enhanced by attaching teaser flashers to the cannonball at the end of your downrigger line. I now use the triangular shaped type and clip two together – with the lower fishing line just above and only 10 feet back from the release clip I’m confident that in addition to the flasher on the line this set-up will be attracting fish to the hootchy nearby.

Plenty of chums are caught every year on a plain pink hootchy but one local trick is to place a small Spin N’Glo in front. The rig pictured is my go to hootchy set-up for chums – bubblegum pink with scattered glo white spots in the mix, on a pair of 3/0 Gamakatsu hooks with a strawberry pink and silver UV Spin N’Glo. Sometimes chums can be partial to a little blue in the mix and the MB-182 is my favorite half and half hootchy; as well some guides have taken to using pink or red hootchies in the octopus size rather than the smaller squirt size. 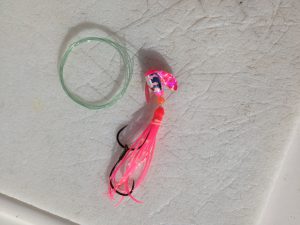 Both leader length and flasher color can be critical to success on any given day and it’s not uncommon if fishing is less than red hot for one particular set- up to be producing when none of the other lines are getting a bite. Pay attention to this and then try and replicate that set-up exactly. Earlier I used the word idiosyncratic to describe chums and this sort of scenario is what I was thinking about – a more down to earth description of them is that they can be fussy critters.

My chum leaders are usually about 48” in length but if you know fish are around – fish seen jumping, passing schools showing on the depth sounder, others catching them – and you aren’t having success then experiment. I remember one year some time ago the successful length was 6 feet or close to it; the hootchy would’ve been hardly moving behind the flasher but that was the ticket to success that season. Whatever their other characteristics chums don’t seem leader shy and I feel 40lb test is the minimum strength for these fish. Flashers with the standard silver finish work well at times but I’ve become keen on the purple UV type in all weather conditions and I also like flashers with a bronze finish on bright sunny days.

Most chums are caught by anglers at depths of less than 100 feet but if I see a school on my sounder below that I’ll send my single line side down to investigate before committing more gear. Conversely, I like my stern downrigger because it enables me to keep a line in the top forty feet, sometimes half that, and if it starts getting hits I’ll shallow up everything else. I’m quite certain that there are times when we anglers are fishing below many of the fish.

This fishery is focused on the area just above Seymour Narrows, below there the fish appear to become more scattered and don’t bite to the same extent, I couldn’t say why. Plumper Bay and Deepwater Bay get lots of attention but fish can be caught all the way to Chatham Point and beyond, depends on how much time you have and how much gas you want to burn!

In this time of reduced access to other salmon species the commercial fishermen will be fishing hard for chums when allowed. The most impact on meaningful recreational opportunity is following a seine opening, which this year are scheduled to take place October 3 and 17, both Monday’s.

The ever-popular Brown’s Bay Chum Derby will be held over the October 14 – 16 weekend, should be a lot of fun so get your tickets early. There are many prizes to be won and all proceeds go to local salmon enhancement projects, a most worthwhile of causes. Tight lines this fall!