Now that we’re into the second week of September the fishing back in July seems some ways off but late last month DFO released the July creel survey for southern BC – or at least for those individual management areas that are subject to the survey – and the results are worth looking at all the same.

Once again the most immediate impression is the very large portion of the Strait of Georgia that isn’t covered at all, the entire eastern side (areas 15, 16 & 28) and half of the western side and bottom end (areas 17, 18 & 29). This is simply a function of a lack of directed funding by the federal government, with the frustration being heightened because recreational fishing interests are agreed that there’s a solution to this ongoing issue – increase the tidal waters recreational license fee (unchanged since 1994) and use the additional revenue to fund initiatives that support better recreational fishery management.

The stumbling block is something called the User Fee Act (to be explained another time, maybe) but the new minister of Fisheries and Oceans, Dominique Leblanc, himself a keen angler, has indicated he wants to find a way to resolve this issue. It’s a strange world in which a user group and its governing agency are in agreement on how to solve a problem but are unable to do so because of an unwise piece of legislation, and all the more so on this issue in particular because quality catch monitoring is now required by government policy for all fisheries.

I digress – the July creel survey. One of the features not captured is the unexpectedly good coho fishing in the central and southern portion of the strait, from Comox south. Area 14 ends just below Parksville and there are suggestions of this in the area data where both the retained and released coho catches are approximately double the recent 5-year average counts. The data for Area 17 (above and below Nanaimo) would have more completely told the story but alas it isn’t there. In contrast, at the top end of the strait in Area 13 both the retained and released coho catches are approximately half the five-year average, conforming to the reports that the coho fishing skinnied down the further up the inner coast you fished.

The five-year average in all the individual categories is a useful metric to judge in-season counts against but it also is useful to remember what fishing events did or did not occur in that time span. For Area 13 the year to date effort (boat trip) count is down slightly against the five-year average but in that time there was a hot coho year (2013), a big sockeye run (2014) and the best chinook fishing in over 25 years (2015), none of which has taken place this year and all of which would have increased participation significantly. To be down only slightly suggests that there have been plenty of people out fishing in the northwest Strait of Georgia/lower straits area this summer.

At 4,730 fish the estimate of retained chinook in Area 13 is the lowest during July since 20111 but is only a few hundred shy of the count in both 2012 and 2013. It is really only against the count in each of the past two years that the chinook fishing this year appears to be less good but I don’t think there’s much to be unhappy about.

As someone who really wants to have faith in the data contained in the creel survey, because it is one of the few verifiable information sources that can be used as a counter to inaccurate statements sometimes brought forward by those interests who think less well of the recreational fishery, I struggle with some of the halibut data. For example in Area 13 apparently no – as in zero – halibut were retained in July. The number was likely small – 11 in Area 14 for example – but none in A-13? At least none were assessed as being released in July, which is an improvement over June during which 102 were thought to be released, against 17 kept. I realize this is all an estimate by an under-resourced program, with expansion factors used on a sometimes small number of fish or encounters but I struggle to believe that 7 times as many halibut were released versus kept in A-13 during June or that none were kept or released in July. Good luck to Minister Leblanc in finding a way to get the resources the creel survey needs, it really is important that it be well run.

Moving on to more recent fishing reports, the end of the traditional Tyee Club season is fast approaching – it seems like we just got going and into the swing of things but there’s precious few days left now. There’s no hiding the count, it’s been another disappointing season with only 9 registered tyee’s at the time of writing. That said there’s been quite a number of less than 30 pound fish caught and there’s a sense that the return to the Campbell/Quinsam watershed will be a little larger than the past few years.

The fishing off of the pier continues to be productive, with large chinook continuing to be caught everyday. I think it’s terrific the opportunity exists for anyone with a spinning rod and reel to have a meaningful chance to catch one of these splendid fish. As well there’s been some productive fishing for those rowboats that have chosen to fish outside of the Tyee Pool area. Two of the registered tyee’s i.e. fish caught under Tyee Club regulations (www.tyeeclub.org) have come from the downtown waterfront area along with numerous other fish that simply didn’t meet the size criteria. See the picture below of three amigos with one that didn’t quite make the grade, caught in the middle of one afternoon on the Labour Day weekend. 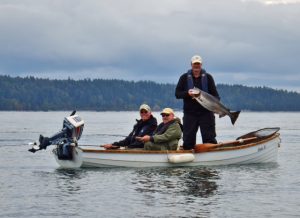