I don’t think I’d ever heard of or read the word acronym until I was well into my thirties but now they’re omnipresent as a means of entitling something, to the extent that for some causes or initiatives it would appear that a measure of thought has gone into their creation, all the better to describe what it is they are associated with. Viewed in that light the acronym SHRP doesn’t compare so well – no rhyme, no obvious clue as to what it represents – but all the same for the recreational fishery in BC it is an important one.

SHRP stands for Sport Head Recovery Program and refers to the initiative designed to recover the heads from chinook and coho salmon caught by anglers that are missing an adipose fin and therefore may contain a coded wire tag (CWT). These tiny numbered pieces of wire are inserted into the nose of a juvenile salmon prior to their release from their hatchery of origin. Once recovered at some later stage of the host fishes life, the date and location of capture is recorded along with the thousands of others to provide an ongoing picture as to where and how the many different chinook and coho stocks are doing each year. For salmon stock assessment staff in the various agencies responsible for managing salmon throughout the Pacific Northwest this information is very important and given the frequent trans-boundary migration of chinook and coho this information is also crucial to the Pacific Salmon Treaty process, which deals with salmon management between Canada and the US.

Since its inception in the 1970’s the CWT program has provided an unrivalled data base, to the extent that in the face of several challenges (to be described shortly) several years ago a panel of experts were unanimous in concluding that there was no obvious replacement for CWT’s and that without the integrity of the program being maintained the management of chinook and coho salmon would be badly compromised. In this time of precautionary management it doesn’t require much imagination to realize the unwelcome consequences that would befall those fisheries that target these two species of salmon were this program to become debased.

For several decades a salmon with a missing adipose fin could automatically be assumed to contain a CWT, however starting about 20 years ago and with increasing extent ever since the only certainty with a missing adipose fin now is that the salmon in question is of hatchery origin and which may or may not contain a CWT. The advent of what is known as mark selective fishery (MSF) management, whereby all or most hatchery origin chinook and coho salmon are clipped has confounded the previous certainties in identifying CWT bearing fish.

I don’t want to divert off into a review of MSF programs now, other than to state the obvious that mass marking allows for different retention regulations between thought to be wild and hatchery fish, an important concept in maintaining the viability of many fisheries in times of reduced abundance of many wild chinook and coho stocks. In the US virtually all hatchery origin chinook and coho are fin-clipped whereas in Canada, as a generalization, the main production hatcheries clip most of their coho but only those chinook that contain a CWT. 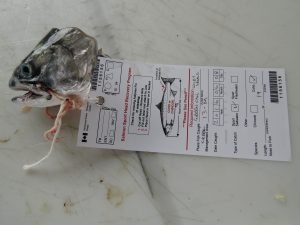 The most persistent consequence of this is that agencies now find themselves dealing with a much larger number of fish heads, only a small percentage of which actually contain a CWT, the all important individual data point. This in turn has increased the CWT recovery cost at a time when fisheries agency budgets have experienced a consistent decline in both Canada and the US. As well anglers who have participated in the program over the years are with increased frequency finding that rather than receiving a letter telling them where a particular fish originates from, instead is a simple note saying “no CWT”, thus the anglers willingness to turn in heads from clipped fish is diminished over time, an understandable “what’s the point?” sort of response.

In an effort to reverse this decline in participation in the SHRP anglers now receive a more informative letter should their fish not contain a tag, describing the most likely stocks of chinook or coho present in the time and area they were fishing in. As well, here in Canada a head from a clipped chinook that does not contain a CWT automatically means it is a US hatchery origin fish and there is value in knowing just that.

Another challenge confronting the use of coded wire tags is that, overall, salmon survival is considerably lower than it was several decades ago, largely due it is thought to reduced productivity of the marine environment, resulting in fewer juvenile salmon surviving to become large enough to be retained in the many fisheries they contribute to. Concurrently, and acknowledging there are some exceptions, because of diminished budgets fewer CWT’s are being applied in the last decade, compounding an already unsatisfactory situation.

All of this is background to saying that the SHRP and the recovery of coded wire tags continue to be of real importance to the future of the recreational fishery in BC. There are enough other threats to it over which anglers and the organizations that advocate for their fishery have little control but anglers can really help their own cause by being diligent in turning in heads from salmon missing an adipose fin. I know it may seem like a bother at the end of a long day on the water but in my view making the effort will pay off in the long run.

I’ve heard it said more than once that providing information to DFO will only lead to restrictions of one kind or another and so, for example, anglers of that view will not participate in the SHRP. As someone who has found himself representing the recreational fishery in various management processes over the years I can say with certainty the worst position to be advocating a position from is when there is an absence of reliable information – with a precautionary management mind set no data is a recipe for restrictions rather than the opposite.

Almost as bad is limited information, in this case a small number of CWT’s from a given time and area. This leads to the use of the dreaded “expansion factor”, whereby a small number of recovered tags is expanded out with a relatively low confidence factor in the assumption. Much better to have as many tags as possible, the resulting decisions will more frequently benefit the recreational fishery than otherwise.

DFO continues to invest in new facilities to make it convenient for anglers to turn in heads, an example is the accompanying picture of a new freezer at a marina cleaning table in Campbell River – couldn’t get much easier than that! 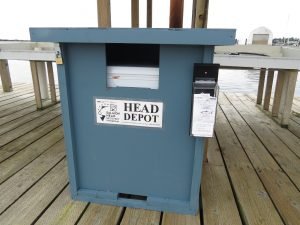 Please do your part in ensuring the success of the SHRP, the future of our fishery depends to a considerable degree on this contribution of data from anglers to those who manage the recreational fishery.